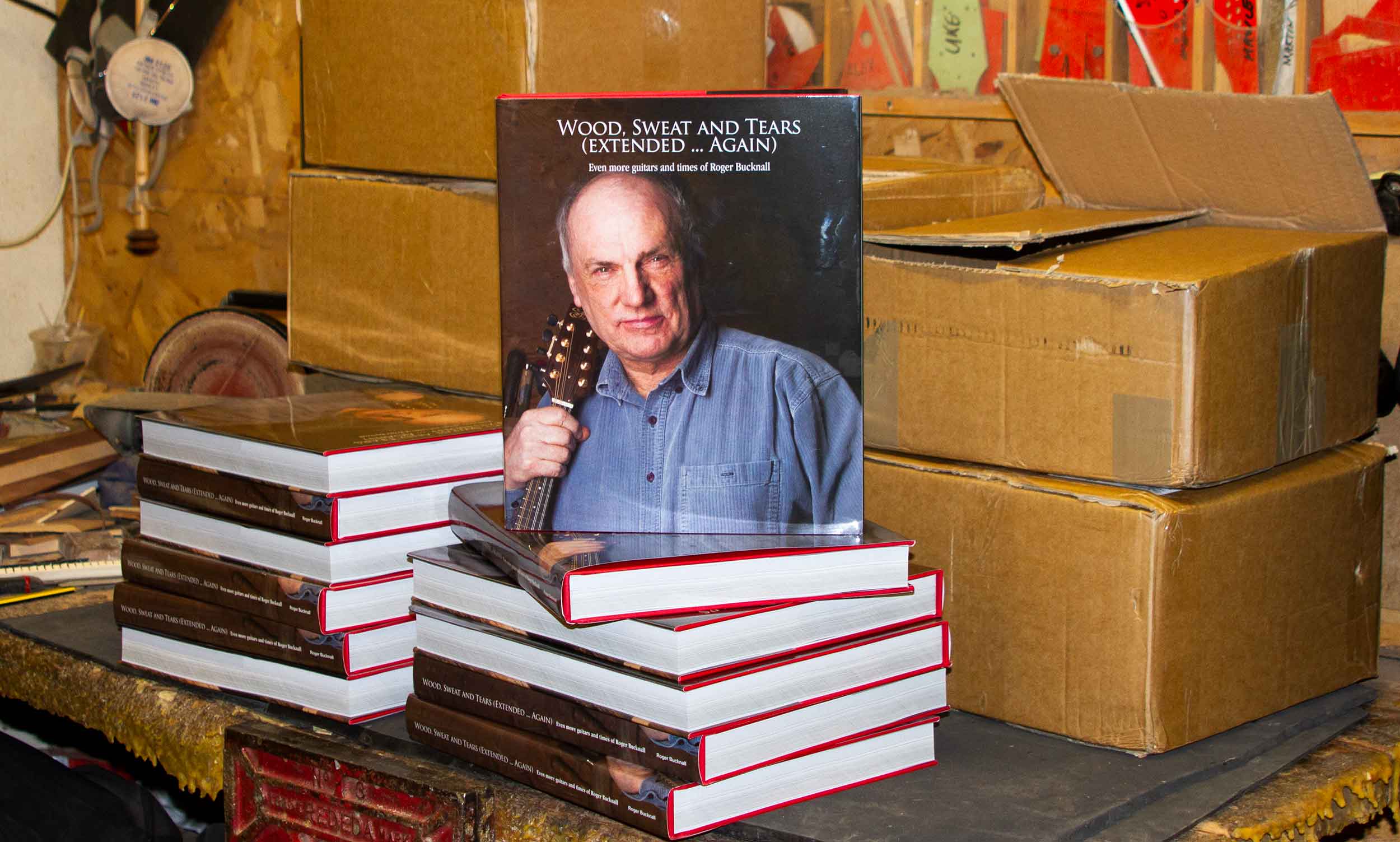 It's here! Lots more Wood (Hooray!), Sweat (Inevitable) and Tears (Not so many recently to be honest). It's a big book, 2.9 kilogrammes and 400 pages. 800 pictures and over 50,000 words. Guitars, Artists, History, Stories, Wood, Workshop, Methods, Tools and an index . With many things that I haven't talked about before.

You can see more about the book here. Booktease.

We are also offering this edition as a downloadable e-book in two volumes. Apart from being a lot cheaper, it will be more convenient for some people and hopefully reach a younger generation.

We have a lovely little Ariel for sale. Made in 2012, it's in just about perfect condition. Unusually, it has position markers on the fingerboard surface, otherwise it is the standard Ariel specification.
For sale at £2,200 ono inc case - SOLD 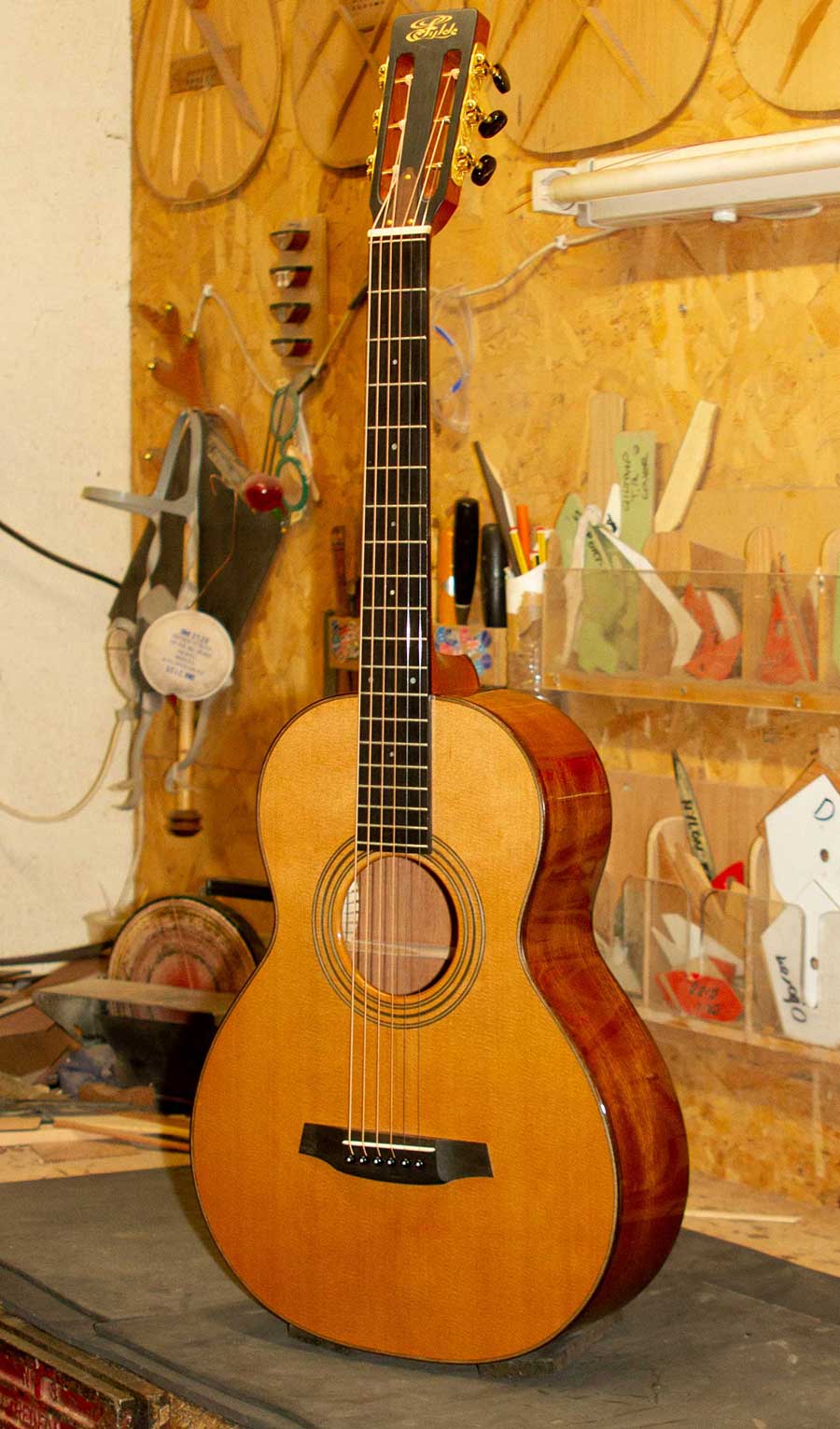 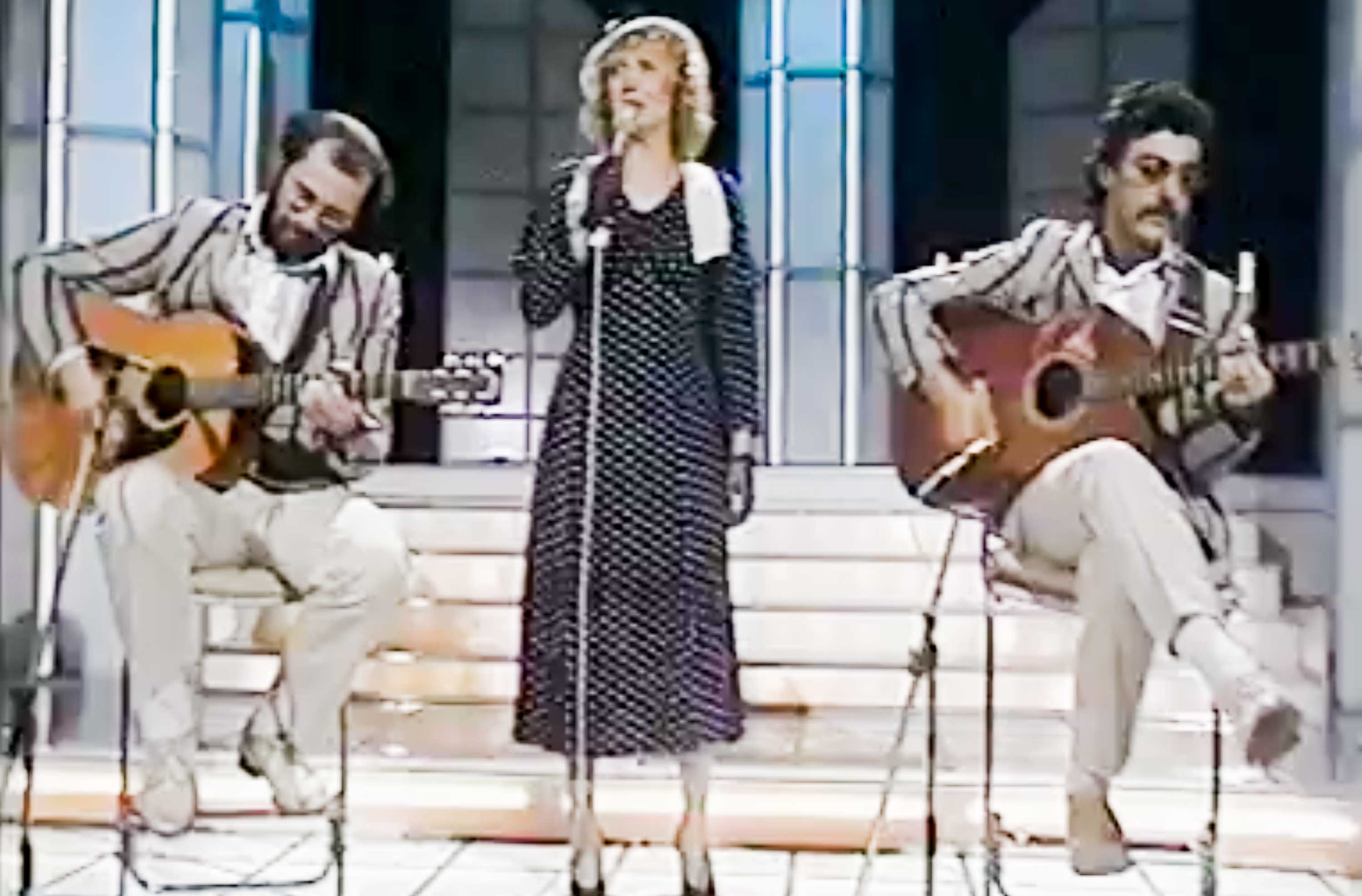 You didn't think I'd miss using a headline like that did you?? A Pebble Mill recording from 1981 ish, with the Birmingham group "Tuxedo Bay"

The Orsino on the right eventually made its way to Skeet Williams, who who sent me the link.

I think this sounds wonderful, and it really swings. Louis seems to have his Cittern strung in Octave pairs, which is unusual, but certainly suits this style.

This was intended to be finished about 6 months ago, but I've had to switch priorities a few times this year. I wonder why? Has something happened?

It's for Clare McNicol, but I think Will will be getting first dibs, and both will be using it to play Lullabies. The back and sides are Pink Ivory with a little Tulipwood. The neck is Walnut, bindings and fingerboard are Ebony and the soundboard is Yellow Cedar. Very pretty. Sounds lovely too. 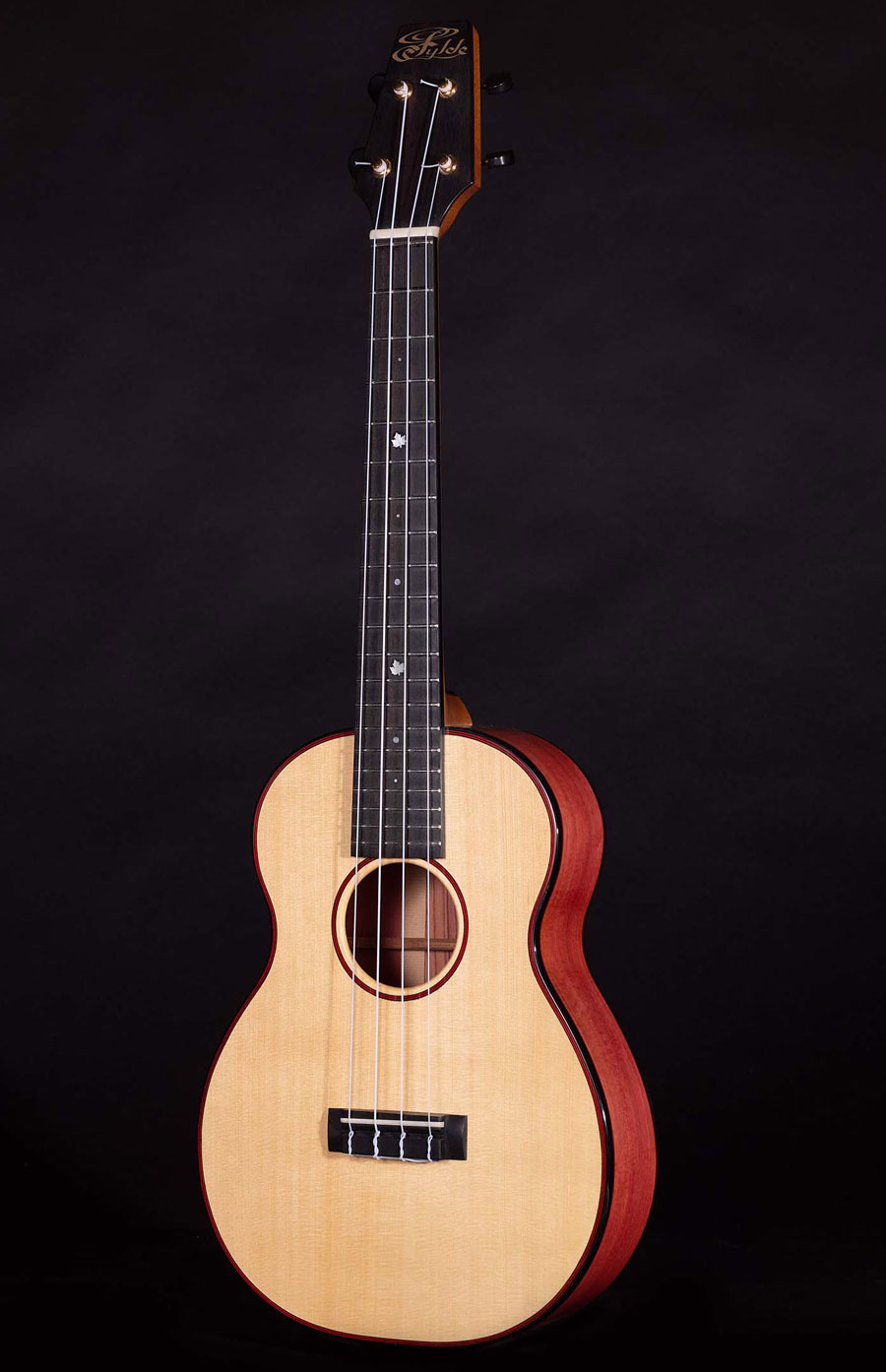 Written  for Will's new baby son. I imagine that the rock steady timing is a big part of the idea. Well done Will and Clare in so many ways.

Will also has a discounts available on his "merch". The festive discount code is XMAS2020 and gives folks 15% off everything in my online shop.

See it all here 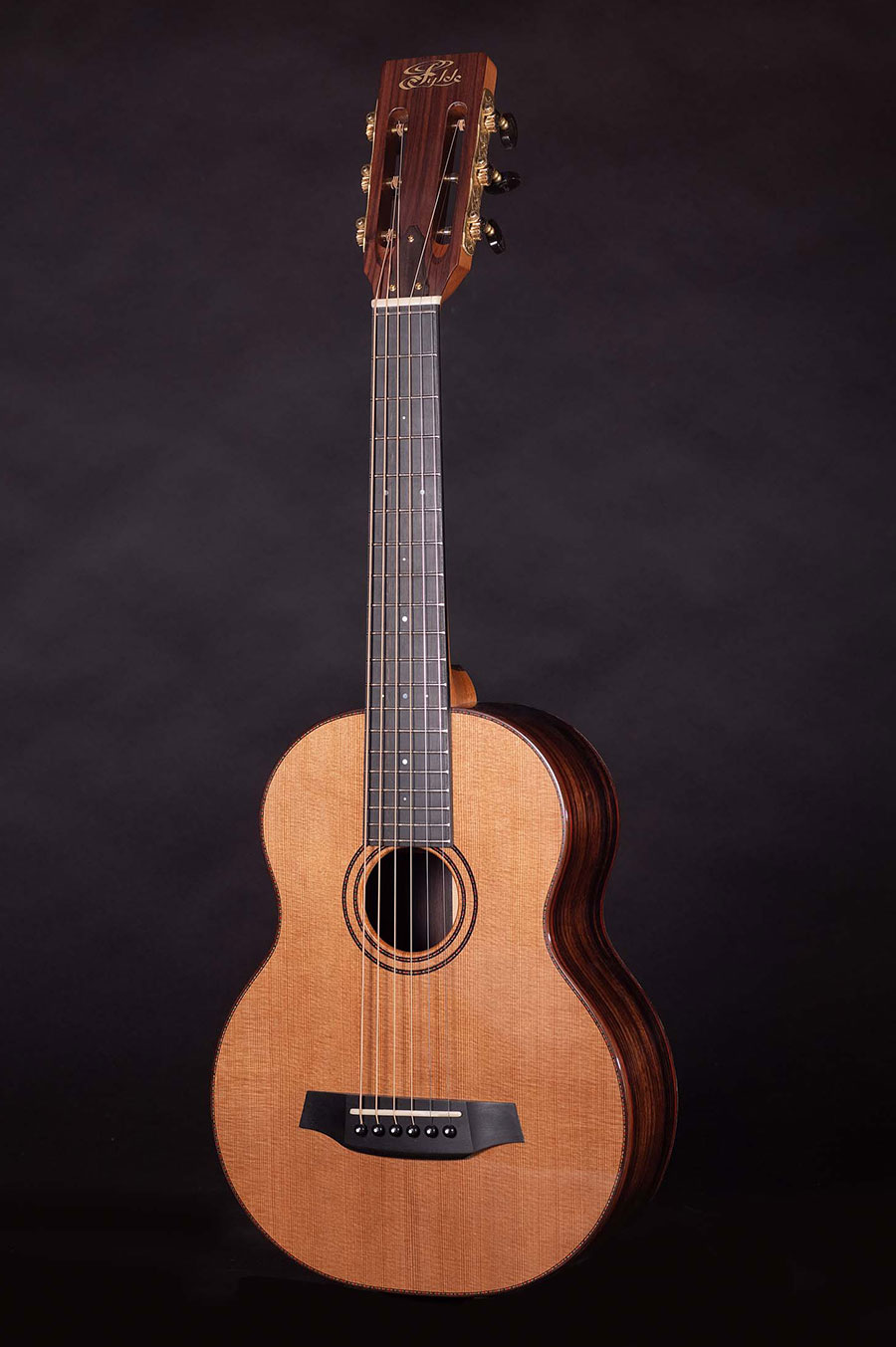 The original order for this stipulated Nylon strings but changed to steel strings just before we started to make it. It would have worked either way. It's interesting how well such a small instrument sounds and plays. It's the same "tension" as a standard guitar, because string length and tuning are the same as having a capo on the 5th fret. The neck is much the same at the nut, and almost identical at the bridge, so adapting to it is very easy.

For a regular customer who is slowly working his way through most combinations of body style and number of strings.

It's based on an Alchemist body, but made from Rosewood, with a Spruce soundboard because of the extra tension and Curly Koa bindings for a bit of bling. The 12-fret neck join is almost compulsory on such instruments, it helps me obtain the extra leverage to counter the string tension and of course, the cutaway compensates for the decreased access. 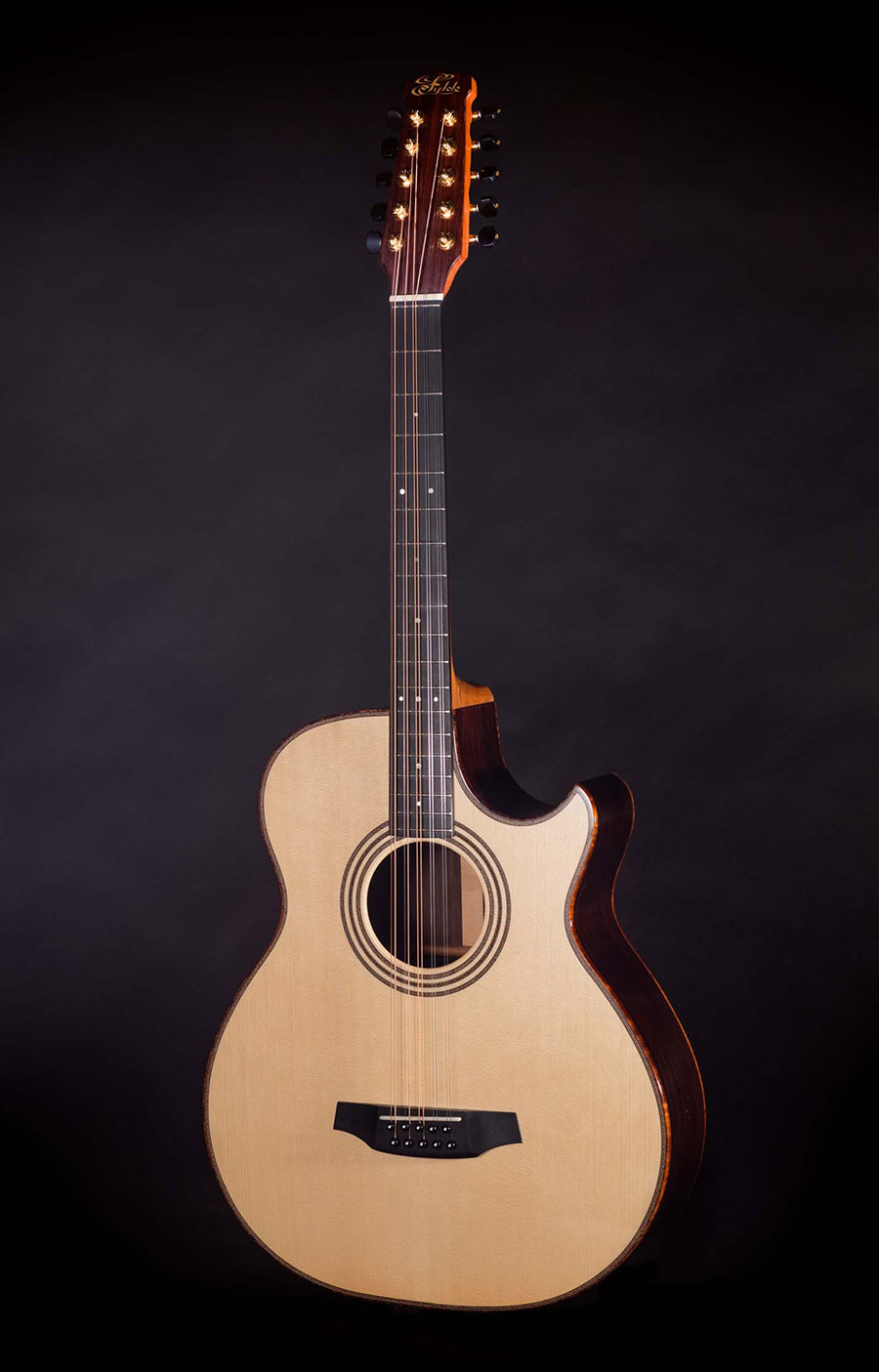 A few snippets of "Admiral Benbow" from Martins new Album, "Home Recordings", and a shout out for an online concert that has already happened!

Details of all these things here

This was a few months ago now, but once again, Fretboard Journal kidnapped John and refused to let him go until he had given up all his secrets. John has been in hiding ever since, inventing new secrets, which means he will be kidnapped again and forced to make another video for Fretboard Journal. I do wish he would write a song called Pocohontas.

The video I posted last month has attracted a lot of comment, some of it more accurately described as "jealousy" I think. I don't care.

I'll never stop buying timber, but the store area is suffering from a little "Mission Creep". I used to have quite wide areas to walk through in the main workshop, now we have to shuffle everywhere, sideways. It's shuffling with a smile though, at least, it is for me, Alex and Paul don't quite agree. They should lose weight; it wouldn't be such an issue for them if they stopped buying biscuits and pies.

Anyway, having written that, I thought I would look for "shuffle" on YouTube, and found this

Is it my imagination, or are these two videos recorded on the same guitar? Can anyone explain? The fact that I spotted it is a bit weird, I had no clues, and wasn't looking for it. Perhaps I'm taking this guitar making a bit too seriously.

I am in touch with Joe and David, so I could have just asked them, but it's more fun this way.

Let's see how many emails I get. Possibly two?

Ben is one of the new breed, keeping UK guitar styles and songs alive.  I'm a big fan.

I must have missed this one, we made Nick this "replica" of one of Gordon's guitars a couple of years ago and he recorded this tune shortly afterwards. Shortly after that, he persuaded Gordon to sell him the original, so he now has twins.

Nick has announced his latest book, "Bird Being", proceeds from which will go to the campaign to save Stonesfield's only remaining pub. A cause after my own heart.

Our friends Giulio and Giulia sent us this picture. I wonder if they have finished it yet.

We have sold out of two of the jigsaw options but will have new supplies very soon and in time for Christmas. It's a charity project, for our usual trio of MIND, Help Musicians UK, and The Woodland Trust. Link to jigsaws

And don't forget the CD - that’s for the same charities.

Link to our CD "Strings that nimble leap" 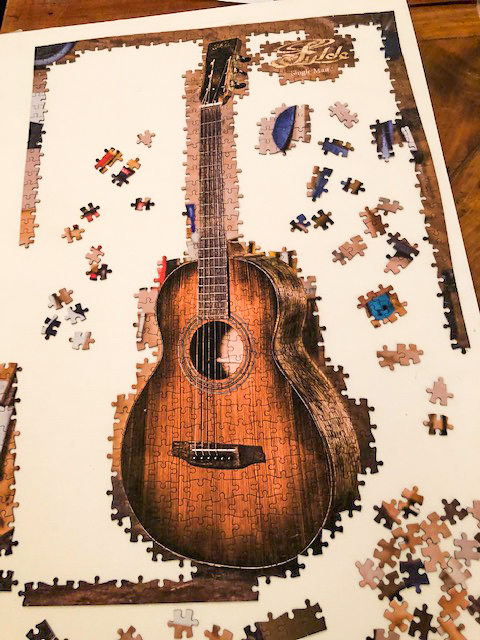 We haven't made many full-blooded Classical Guitars; this one is from about ten years ago. Niall studied Classical Guitar in England, then Flamenco guitar in Spain - hence the black nylon treble strings. That might be why the treble is so strong on this guitar, it's usually a battle to get the top strings to balance with the bass strings.  I think this piece is lovely.  I’m fascinated by the reflections  on the treble strings near the soundhole, and the way they move up and down as the strings are pressed onto the frets.

John doesn't change, his dry humour and presentation is always there. His playing is always as good as ever.

I've been told of rumours circulating about the consequences of Brexit re guitars and the CITES regulations, so I thought I'd try and clear it up.

I contacted the UK authorities, and this is part of their reply - it starts off with a worrying statement, but the relevant stuff follows after,

"After the end of the Transition Period on 31st December 2020 you will need CITES permits to import and export specimens between UK and EU, including when travelling with personal possessions such as musical instruments…

… most finished musical instruments made from Dalbergia (rosewood) species on Appendix II, Annex B are exempt from CITES requirements. Dalbergia nigra (Brazilian rosewood) is on Appendix I, Annex A, and permits are required for this species."

I wish they had put those paragraphs in a different order, it would have been easier to understand.

In my own words - If you have anything made from Indian Rosewood or any of the other Rosewoods in CITES Appendix II Annex B (which is nearly everything), then no permits are needed for travel or for buying and selling one guitar. The only difficulty will be when dealing with Brazilian Rosewood, which is Appendix I Annex A. For that, you will still need a permit.

The whole thing is really no different to how it was before. After January 1st, any country outside of the UK, will be regarded as "export". In that sense, the regulations that have applied to all other countries in the past will now apply to the EU as well, and they are only troublesome with regard to Brazilian Rosewood. "Musicians who intend to travel regularly (with Brazilian Rosewood - my words) - can apply for a multi-use Musical Instrument Certificate (MIC), which is valid for 3 years." 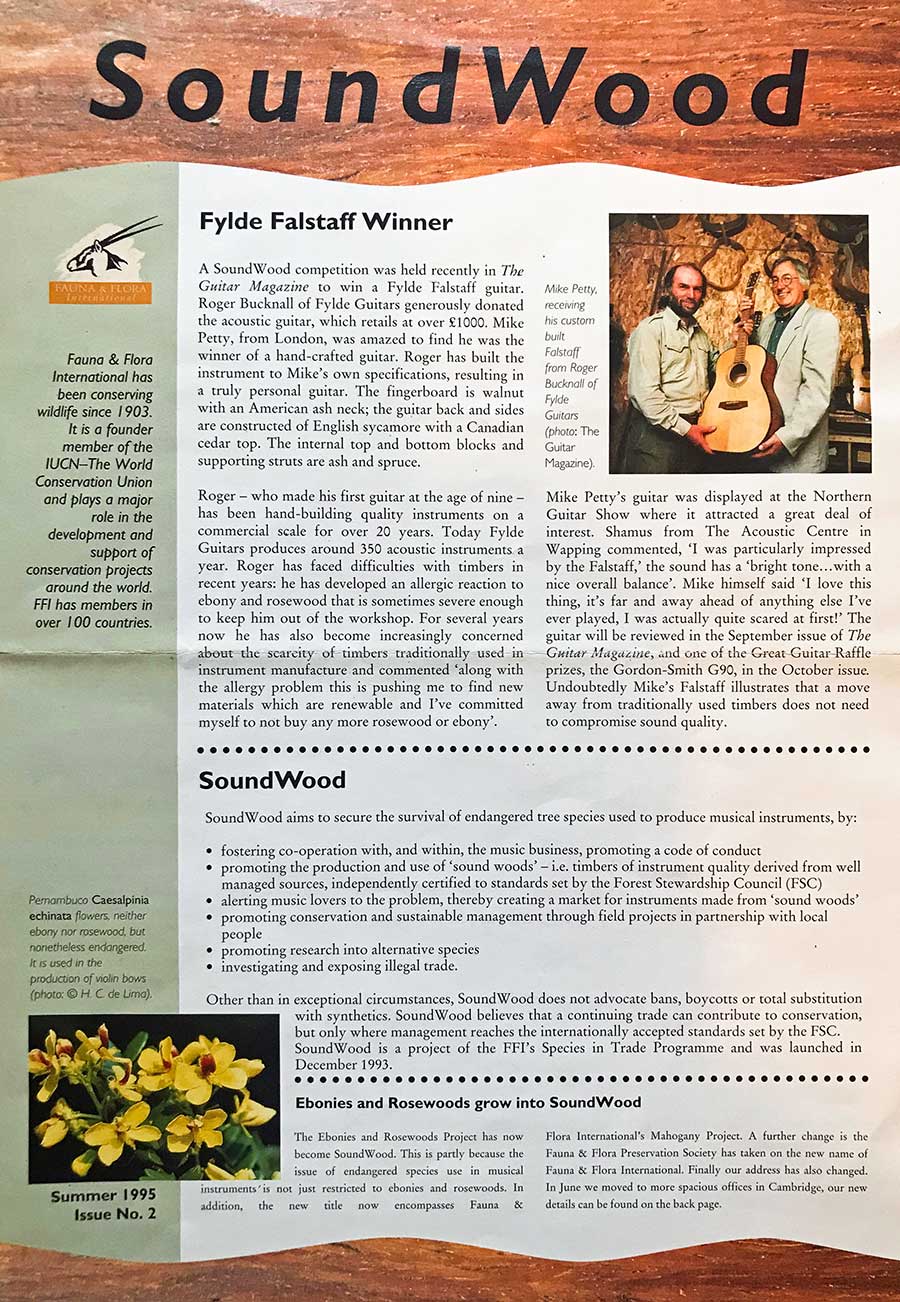 Going back to perhaps the 1980s, I was a founder member of "Flora and Fauna International" and we co-operated on several projects. One of them was to produce a guitar from sustainable materials. This guitar was specially built for the winner of a competition organised by "Guitar Magazine" in 1995, we used Sycamore and Cedar, with an Ash Neck and Walnut fingerboard and it featured in the FFPS periodical "Soundwood". The winner of the guitar, Mike Petty, has since passed the guitar on to his friend Hannah Bullock

and here we are - Hannah playing that same Eco guitar 25 years later- that's one generation already.

Basically, Hello to the whole new, frightening but wonderful world of having children. Well done Megan, good luck in all you do. 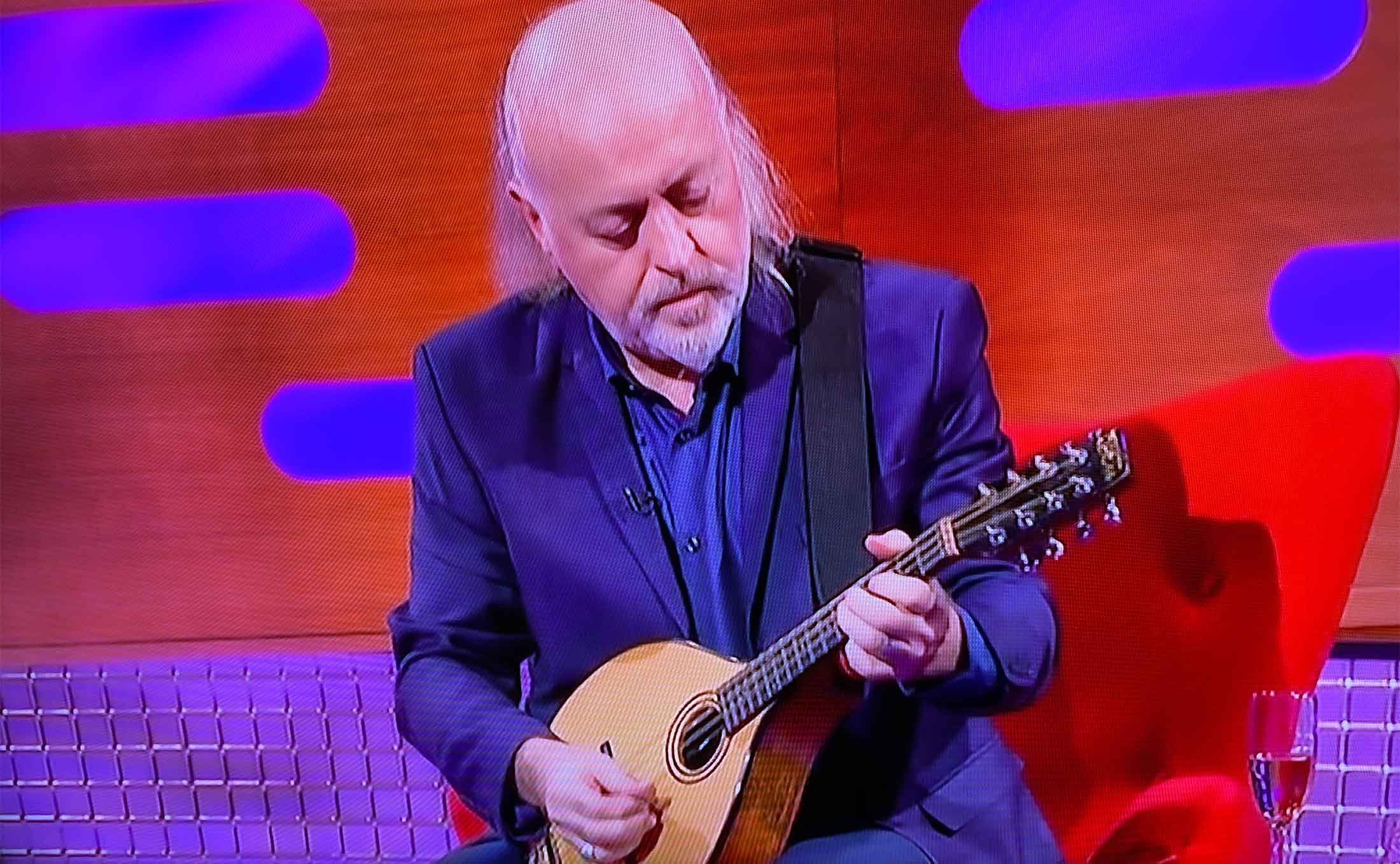 Bill's Mandola video is now approaching 900,000 hits, my people are in touch with Bill's people, and I've suggested that we have a party when it gets to one million.

And isn't he doing well on strictly?

Clive's online concert last week was a huge success, He used his Fylde Ken Nicol for much of it and made some lovely comments. I even joined in the online chat, perhaps one day I might understand how that all works, and I will learn not to press "return" before I have corrected all my spelling errors and other mistakes.

We had a small scare last week. Some nearby CCTV footage showed a few suspicious characters "casing" the workshop at 3 in the morning. When I found out, I decided to take some instruments home, including a rather special banjo. It's bad enough being burgled, but I couldn't face arriving at work to find it full of banjos.  Boom Boom!

Hopefully we will have some Christmas videos in a couple of weeks. Until then!