This is the track that the boys wrote and recorded specially for the “Nimbles" CD. A bit more about that later.

There is of course, a story here. I had told them that when they played their lovely Latin duets, Moira would be likely to dance around the kitchen. I think that image stayed with them, so they wrote " Danca da Cozinha", which translates - "Dancing in the Kitchen". Luke was a bit rude about my dancing. He shouldn't make such a fuss, it was only once, and his toes will recover eventually. Anyway, he should have let me lead.

Isn't it fun? Will shot the whole thing on his phone, and he has also written out the dots if you want to learn it:

I had hoped to have a photo of Moira with a rose between her teeth, "striking a pose with a rose" but I didn't get much co operation for that.

Will and Luke's site 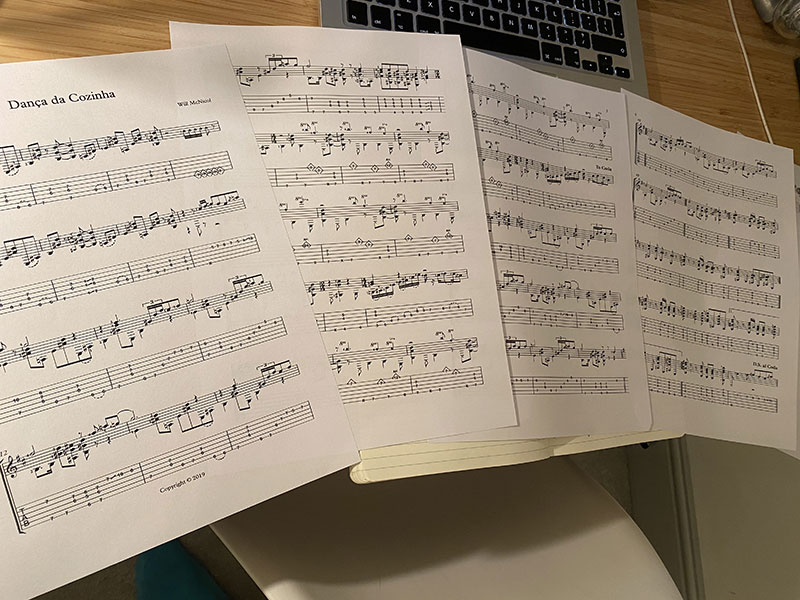 I've made some changes to the Single Malt instruments recently.

There will never be a shortage of oak barrels, but I have run out of good looking washback vessels for the soundboards, so from now on I will be using Sinker Redwood, with a little "sunburst" added, and more conservative Ebony fingerboards and bridges, with reclaimed Mahogany for the neck.

I might even use "Rocklite Ebano" for the fingerboard, so that the whole guitar is still made from reclaimed or "eco-friendly" timber.

This really is a very striking guitar. The tone is rather more mellow than the original Single Malt.

Louis is a student at the Royal Northern College of Music with Craig Ogden for Classical Guitar, and is one of Martin Simpson's students for "The other stuff" 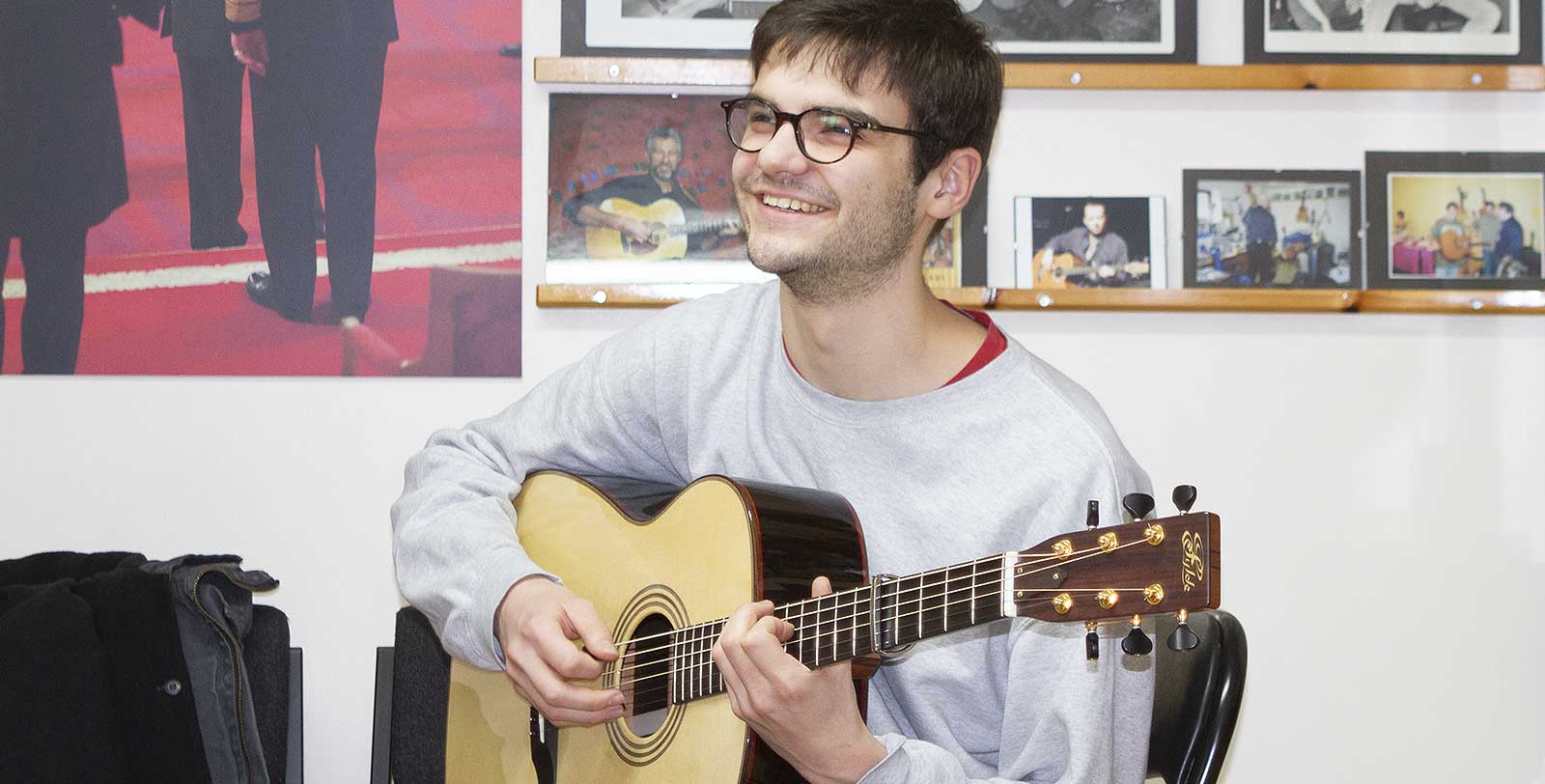 Louis has been used to playing 14 fret guitars, but Martin is a big influence, and Martin's Fylde guitars are 12 fret, so:

13 fret it is then. How many of you spotted that?

The soundboard is Swiss Pine, with lots of very fine "silking". The back and sides are Madagascar Rosewood, it's so dark that at one point I thought I'd used the wrong piece of wood, but careful inspection with a magnifying glass reassured me. The 13-fret neck join wasn't just a whim, it's a genuine attempt to find what Louis needs, and it wasn't my suggestion, it was a combination of Louis' thoughts with Martin's encouragement. It's difficult to say how much difference it makes to the sound as we can't make direct comparisons, and once again, words don't work very well, but I think it does have some of the fullness of 12 fret guitars, and some of the strength of tone of a 14-fret. We are all pleased, let's hope it isn't unlucky!

Louis is playing in Sam Sweeney's band, which is touring in May, and opening some of the shows with Owen Spafford.

This must have been about 1980. I think Martin Barre is playing his own Ariel, although it might be the one that I supplied to Ian Anderson before Martin bought his own. The first ever Ariel in fact.

For those who are interested, the tune was written by Roland Kirk. I seem to remember it being used as a TV theme tune somewhere, but where exactly, I don't know.

There are now quite a few videos of the music recorded for “Nimbles", and I think, a few more to come.

There is no mistaking Tris's playing, so neat and rich. He didn't have his new fan fret for the original recording, but he makes excellent use of it this time. Recorded and videoed by John Breese.

Tris has a been making more videos, so I will share those soon.

He also has a new website, all very good news indeed.

We can always rely on Skeet to make acoustic guitar playing "fun" as well as musical.

It's the 50th anniversary of "Bridge over Troubled Waters" this year.

One of my recent visitors told me about an unusual instrument we made for Skeet in the mid 1990's. It's a solid body mandola, a chunk of Mahogany with recesses and electrics in it, and a top added to make them into "chambers".  It's quite good fun to forget something and then to be presented with it years later "Eeek. Did I make this?". But I do remember this one, just.

When I can't remember, well - you'll be able to tell me anything at all won't you? 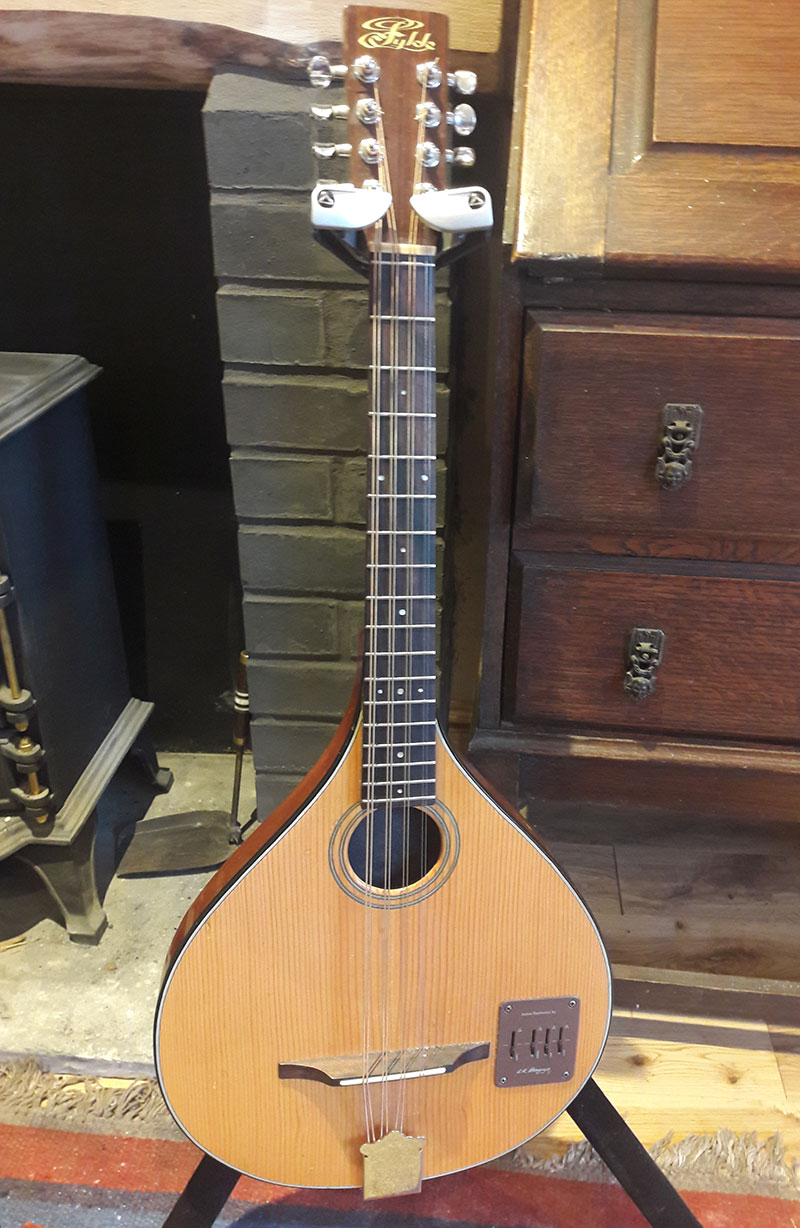 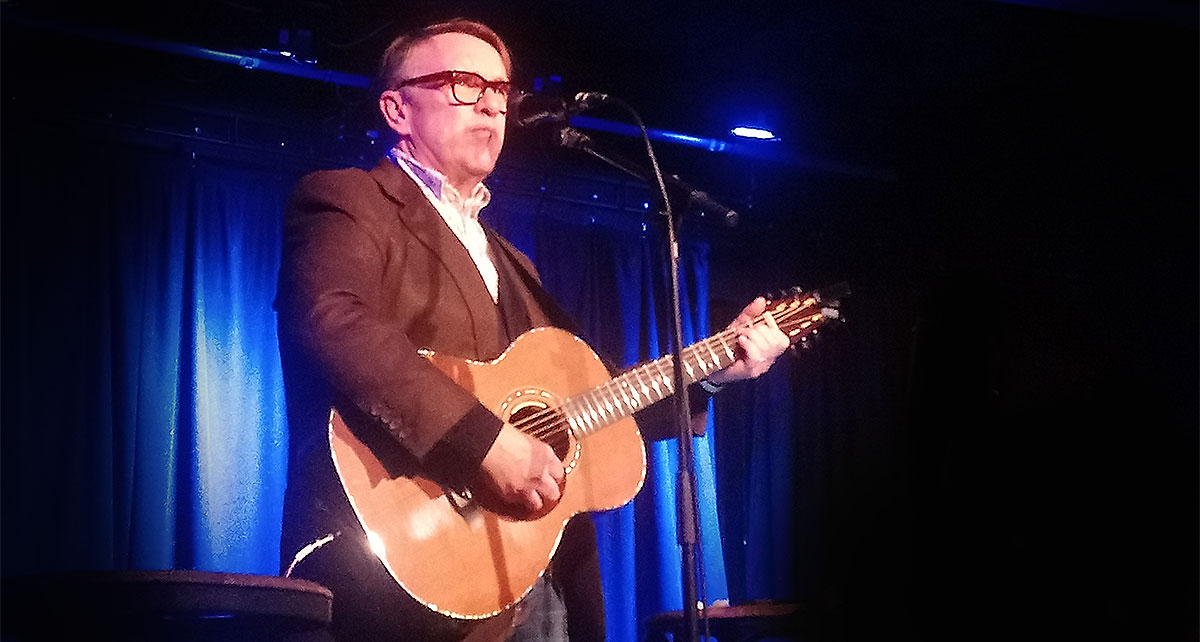 I'm fairly sure I haven't used this before. 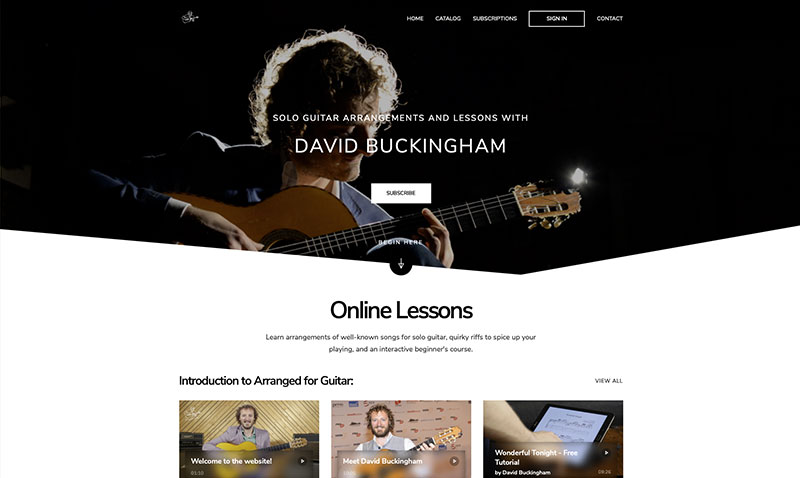 It's one of David's more Jazzy tracks that he plays with his band when he gets chance, along the same lines that he recorded for "Nimbles"

And David has started a new project! Arrange for Guitar - website link

"David's arrangements are among the best on the web. His USP is that he has an outstanding classical guitar technique and yet plays popular music with it." Prof. Jens Michow (Germany)

And - just look at this for a Fylde Fest 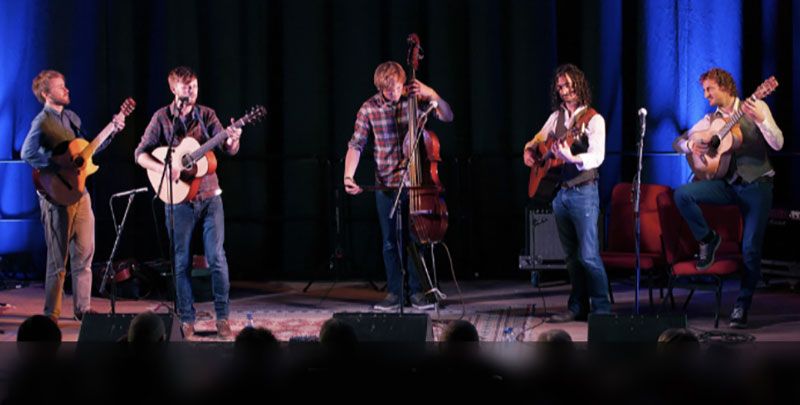 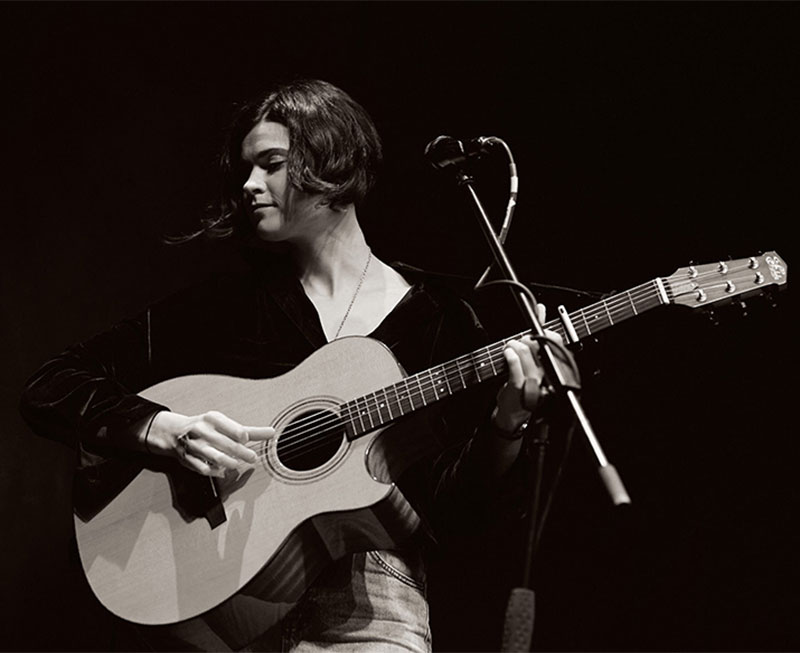 Hattie Briggs caused quite a stir when she toured with Alfie Boe last year, and various friends put us in touch. I had a Leonardo model available, and she has taken to it very well. We've been testing pickup options for a few months, so soon we might get some videos. 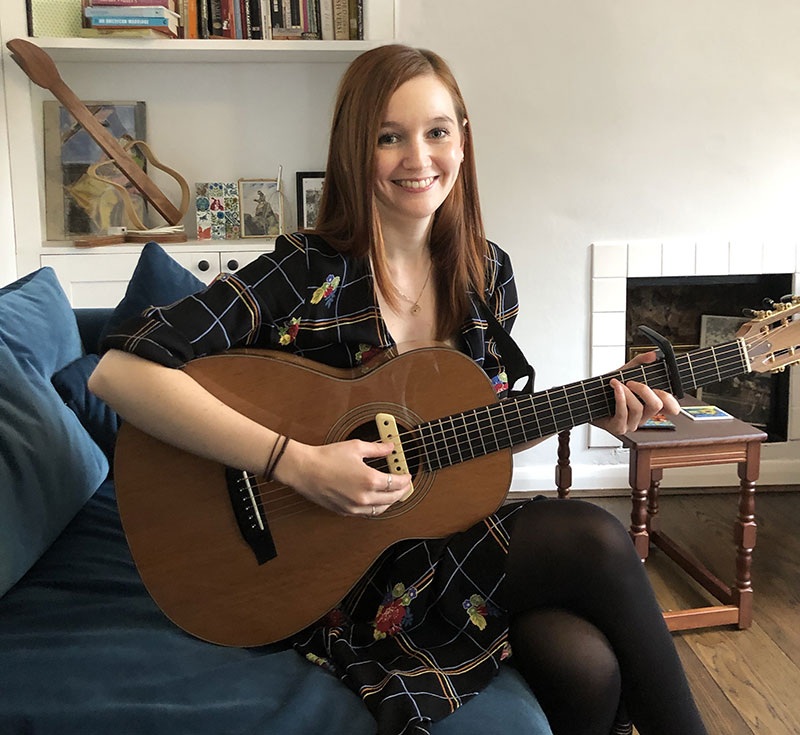 Maz has lots of links with the Lake District where we operate, and we have lots of friends in Common.

Shortly after the picture above was taken, Maz decided that although she loved the Ariel, she really did need extra room on the neck. So, we added a cutaway. Sounds simple doesn't it? 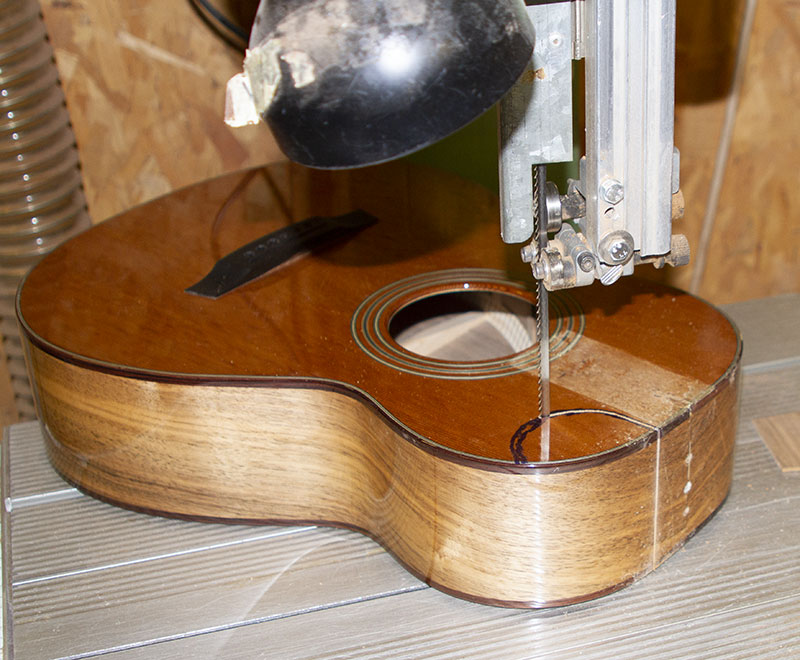 Perhaps the scariest guitar making pictures you have ever seen? It worked out fine, we have sometimes done this without removing the neck, but it's a little easier this way. Maz played the modified guitar at Celtic Connections this month. Again, hopefully videos soon. 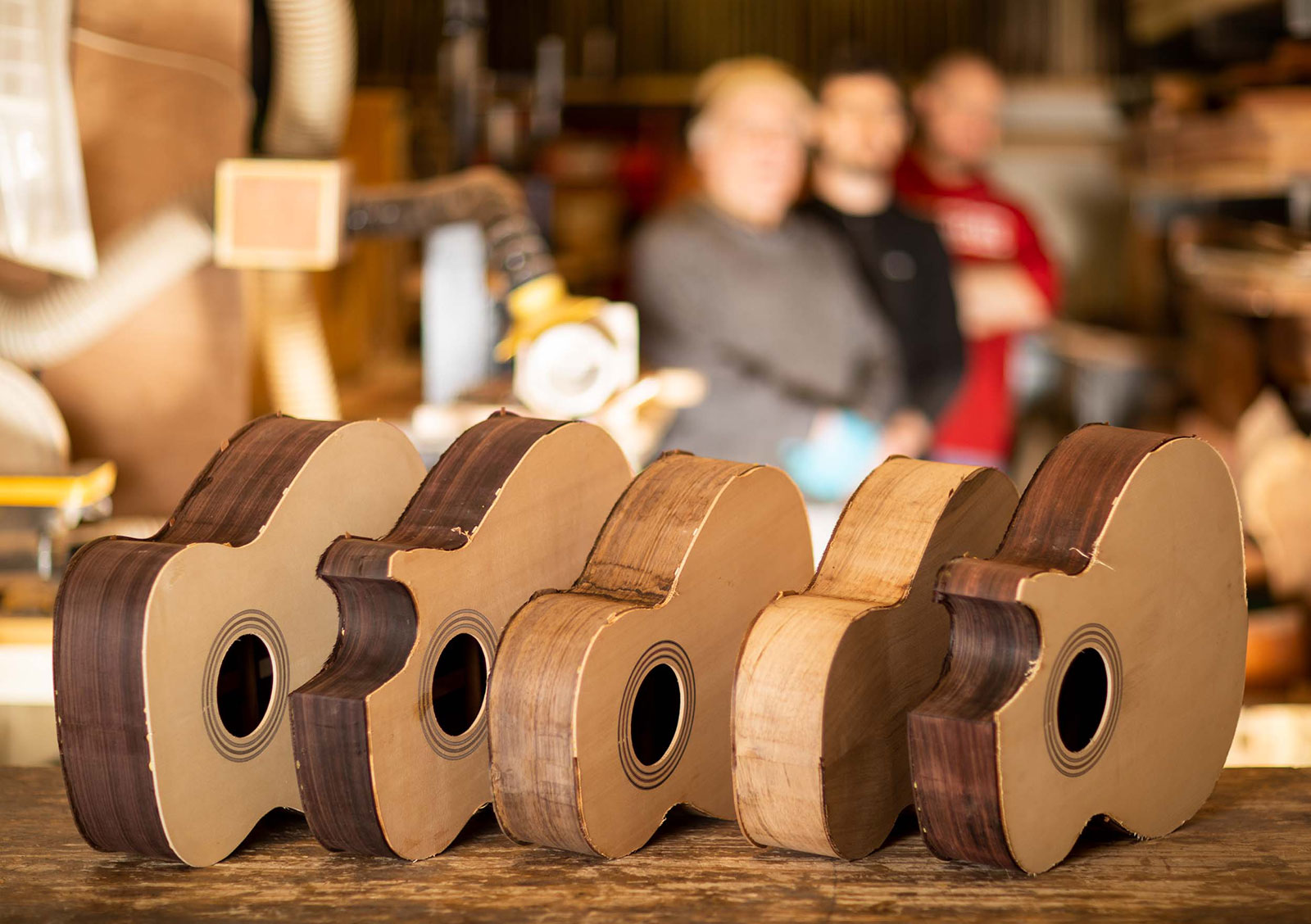 In this picture, you can just see the night shift arriving.

When Alex, Paul and I eventually go home, tired and aching, dusty and hungry, the night shift takes over, you can just see them in the background, easing themselves out of the underworld. They don't need feeding, health and safety is never an issue, and they have gone by the time we are back in the next morning.

Another "test" guitar similar to the "Martin Simpson” Falstaff, just so we have one around.

It was built very lightly, with a Cedar top, and Cedar bracing. Despite Gordons very light stringing at the time, it didn't survive very well and someone persuaded Gordon to have the top replaced.

We can't be sure who did the work, or even why he did it, but it was an excellent job, just about invisible. if it was you or anyone you know, contact me, I might let you pay me to come and make the tea.

Anyway, Gordon never did "gel" with the new sound, he has sold the guitar, and we have managed to rebuild it again for the new owner. This time hopefully more like the original, but with a slightly stronger structure. The work was very difficult in places, particularly getting the neck back on at the correct angle - this was the third time it has been fitted, and there wasn't much wood left where I needed it. We don't have any allocated time for this sort of work so we fit it in when we can. This one took about 18 months.

But the new owner, a well know music "host", is delighted.

Sapele with a Spruce top to support the double tension.

He is writing a feature for "Guitarist” Magazine. David, of course, also features on the "Nimbles" CD.

Do you have your copy yet? If not, why not? 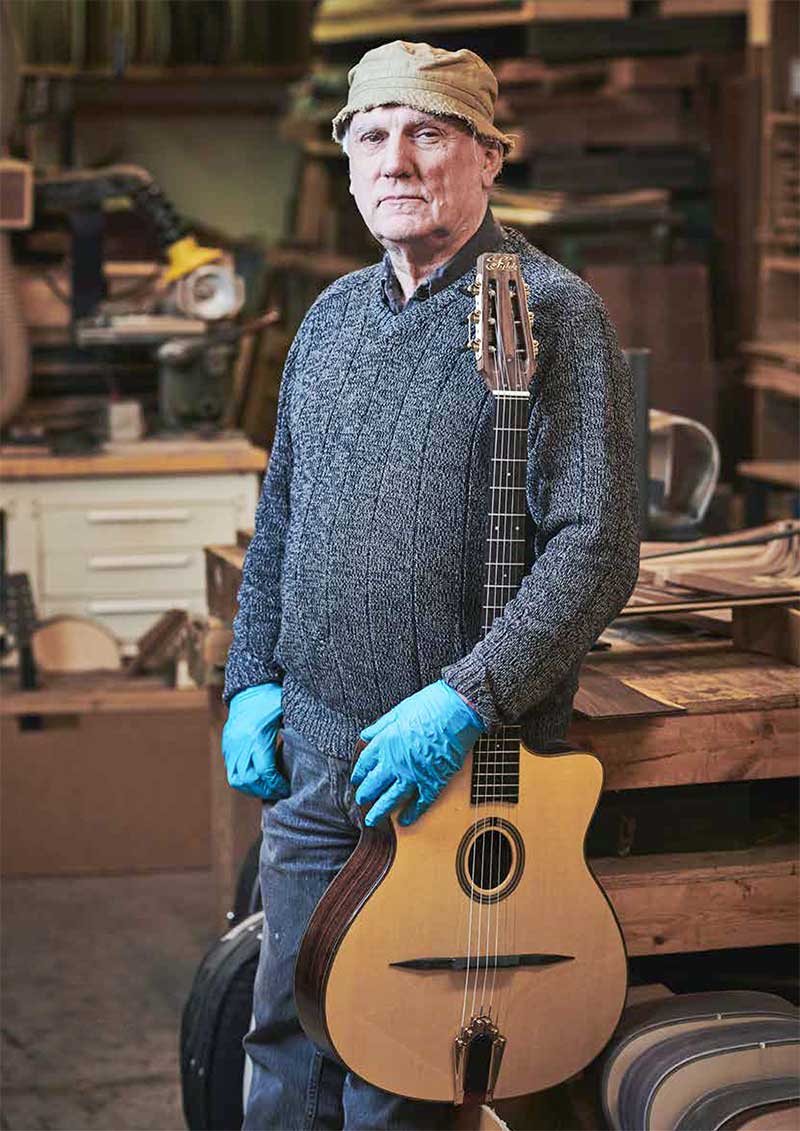 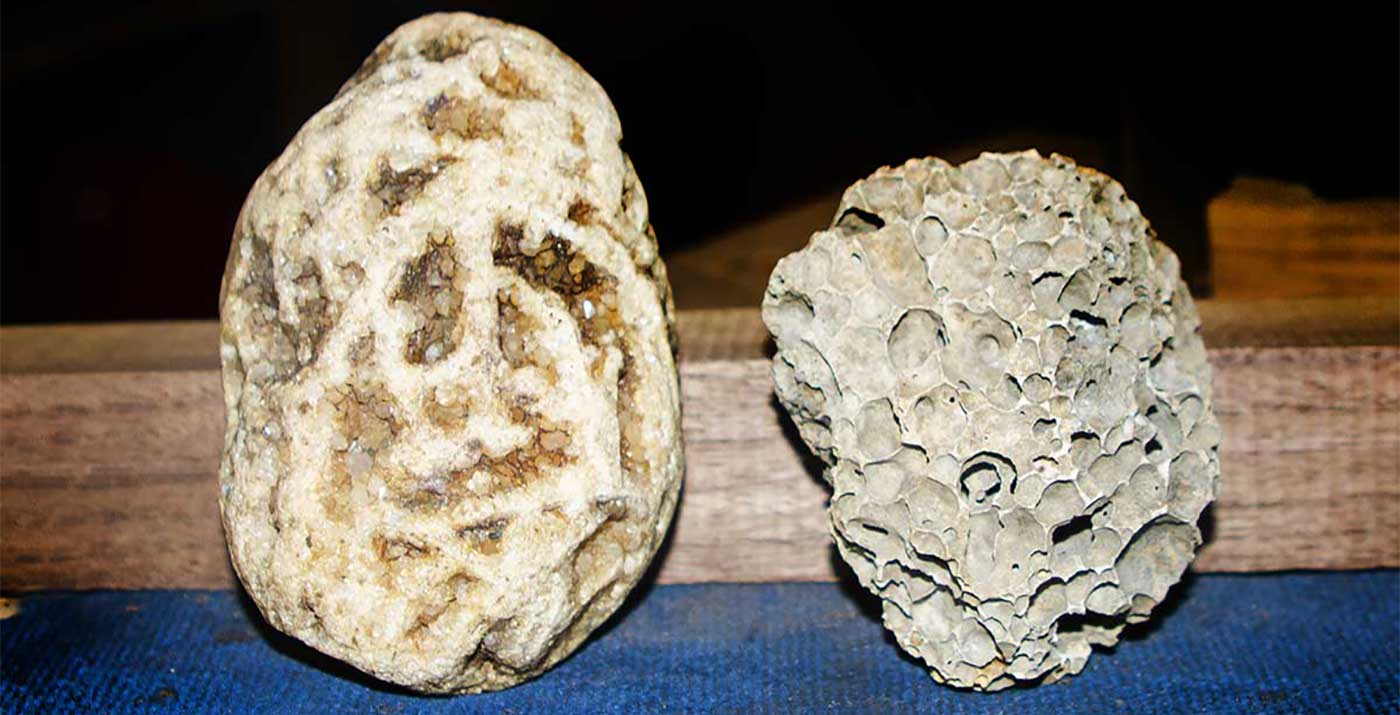 A very poor joke, even by my standards, but it's all I have.

I found them in our garden, and as usual, there is a story. The area where we live is known for its unusual geology, lots of minerals have been mined near here. In fact, our house was built by the chief engineer of a nearby Tungsten mine a hundred years ago.

I found these in the foundations for the new “Green Oak” conservatory I am trying to build, muscles and time permitting. I’m sure the white one is Limestone of one form or another, the little crystals in the nooks and crannies are beautiful, but I don’t understand the lattice - like geometric structure around them.

The darker one is like froth made from stone, it's not cement, it's more like pumice but I don't remember a volcano erupting recently. Not outdoors anyway. I’ve probably spoilt them both a bit by boiling them in washing soda to get them clean.

Moira did ask why the cooker was in a bit of a state, and when I told her I’d been "boiling my stones" she hardly took any notice, probably because she had also seen the coffee machine, which had overflowed while I was trying to rescue the cooker. She loves me really; she knows she shouldn't leave me alone.

Anyway, enough of my domestics, what are these fascinating things?