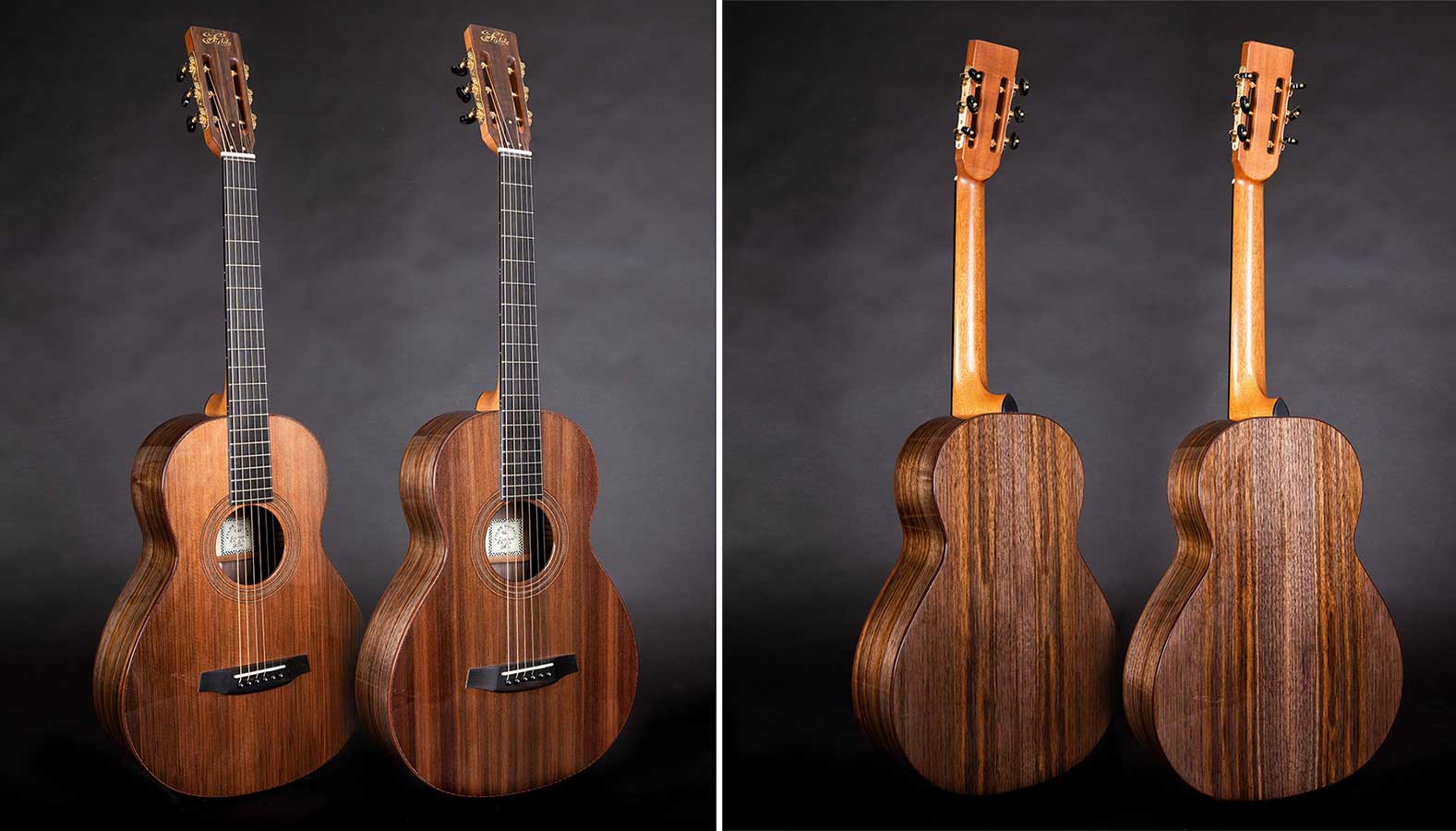 A small deviation from the "Oliver" film - "Boy for sale" etc, or perhaps even "You gotta pick a picker or two"?

You can buy both guitars if you wish, but I am offering them separately. To good, warm, caring homes with plenty of gruel of course. If someone called Nancy is interested, I might offer a discount. If your name is Bill, maybe don't bother (sorry Bill, not you).

The idea started off as a guitar to sell in aid of the Ullapool Guitar Festival (HOORAY), more of that later. I was also running a little late in "available now" guitars for the website, so it made sense to make two, and offer a choice. You never know, maybe some rich uncle will buy them both.

I took advantage of the situation to test two slightly different finishing schedules, we know which is which is, but I don't think anyone else will be able to tell. 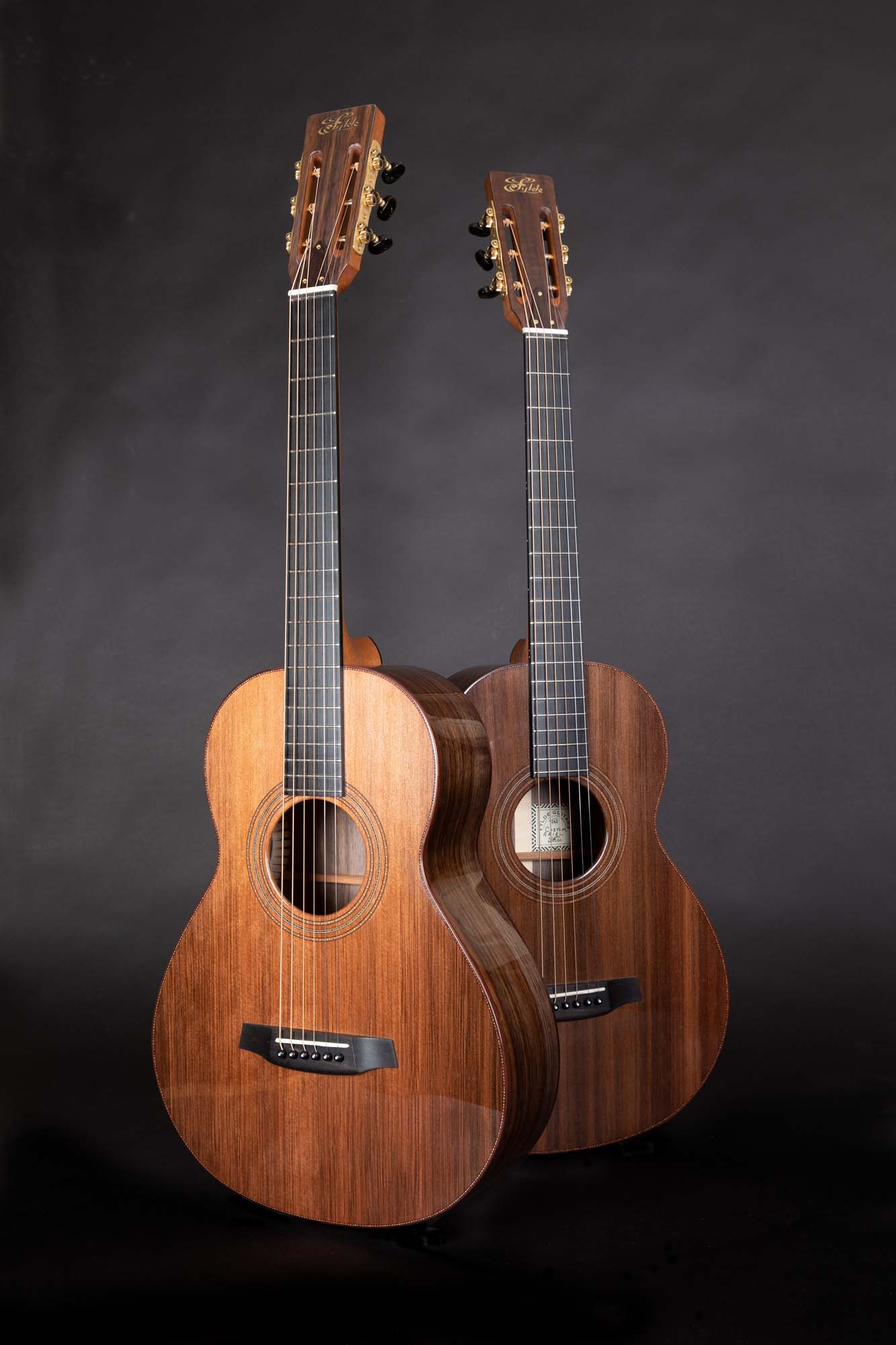 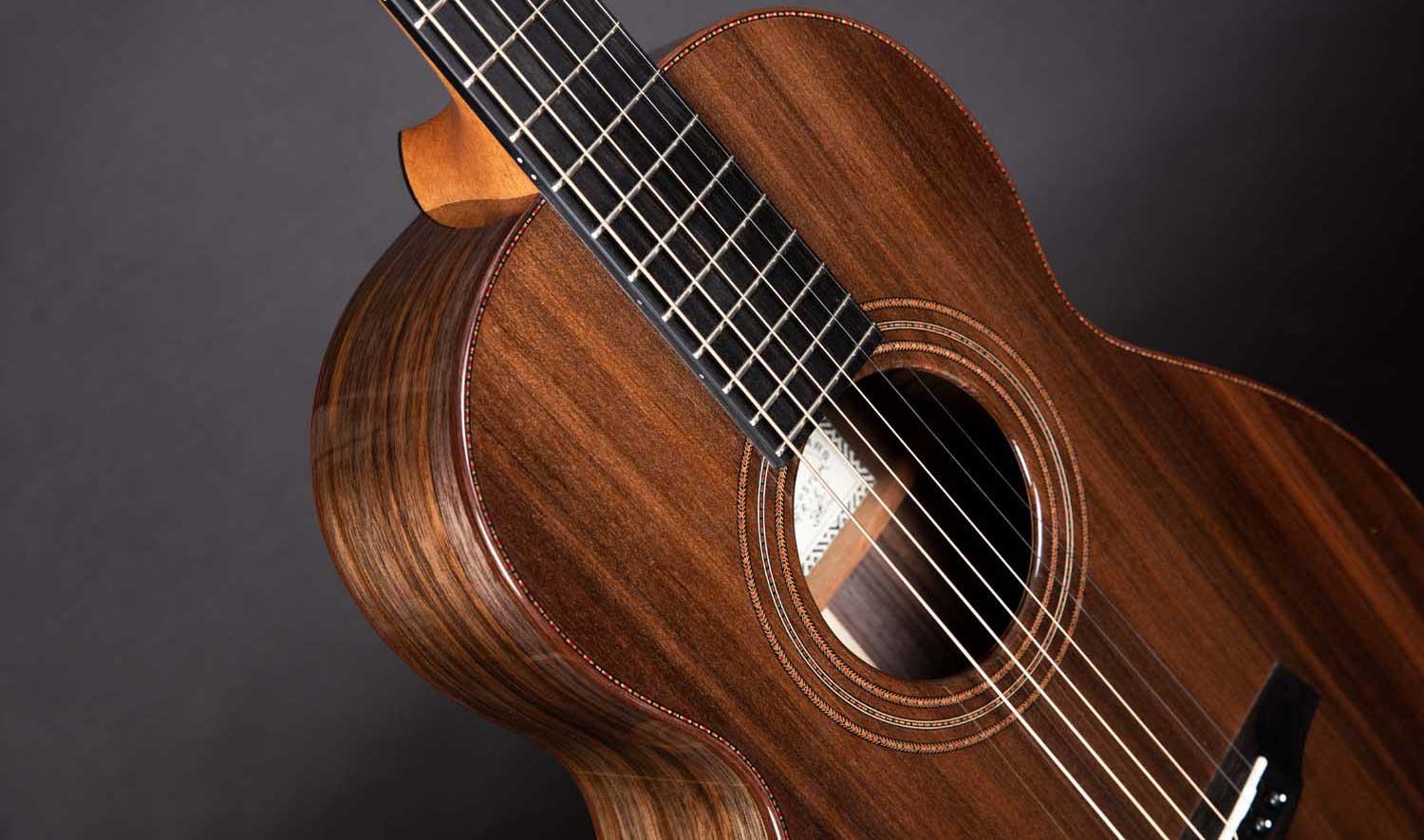 The proceeds from one of these guitars will go to Richard Lindsay at the Ullapool Guitar Festival. 2020 was inevitably cancelled, and we are all hoping 2021 can go ahead, so the extra money will help. The dates are in our diary, October 1st 2nd and 3rd. Keep them free, tickets are selling in spite of the current situation.

One of the excellent new songs from John's new album " The Fray", article written and song premiered by Jason Verlinde of Fretboard Journal. (LINK TO THE ARTICLE) 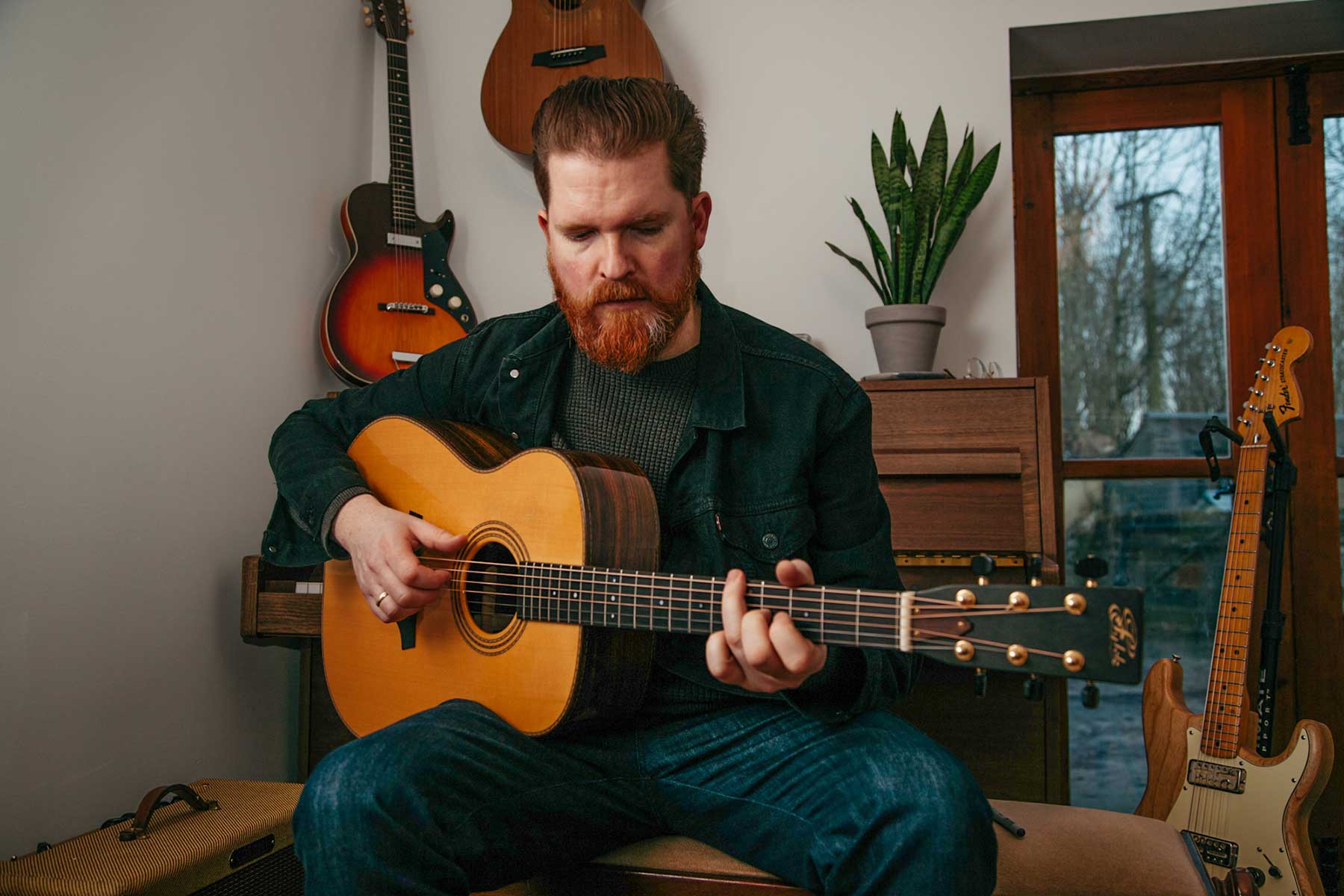 And another piece from Fretboard Journal, (LINK TO ARTICLE) this time it's written by our good friend and massive John Smith fan, Brian Saunders, with a little help and inside information from yours truly. It's a pleasure to be able to write for other publications sometimes.

I watched John on his Facebook livestream last weekend. He looked freezing cold, wearing a thick jacket and a woolly hat. I posted that I must invent "guitar players gloves", and I've since realised that I could get them made in, wait for it … Mittenwald. Aren't you glad you read this newsletter?

When I first met Eric, I don't think he owned many guitars, and for some years he played Fylde almost exclusively, amassing, I think, 10 instruments from me, each one of them with a story. This is one, originally a 12 string built especially for a very important event, and then Eric modified it in a very interesting way. Eric tells the whole story in this video.

Eric has a lot of live music on his Patreon site, well worth a look. Link to Eric's website 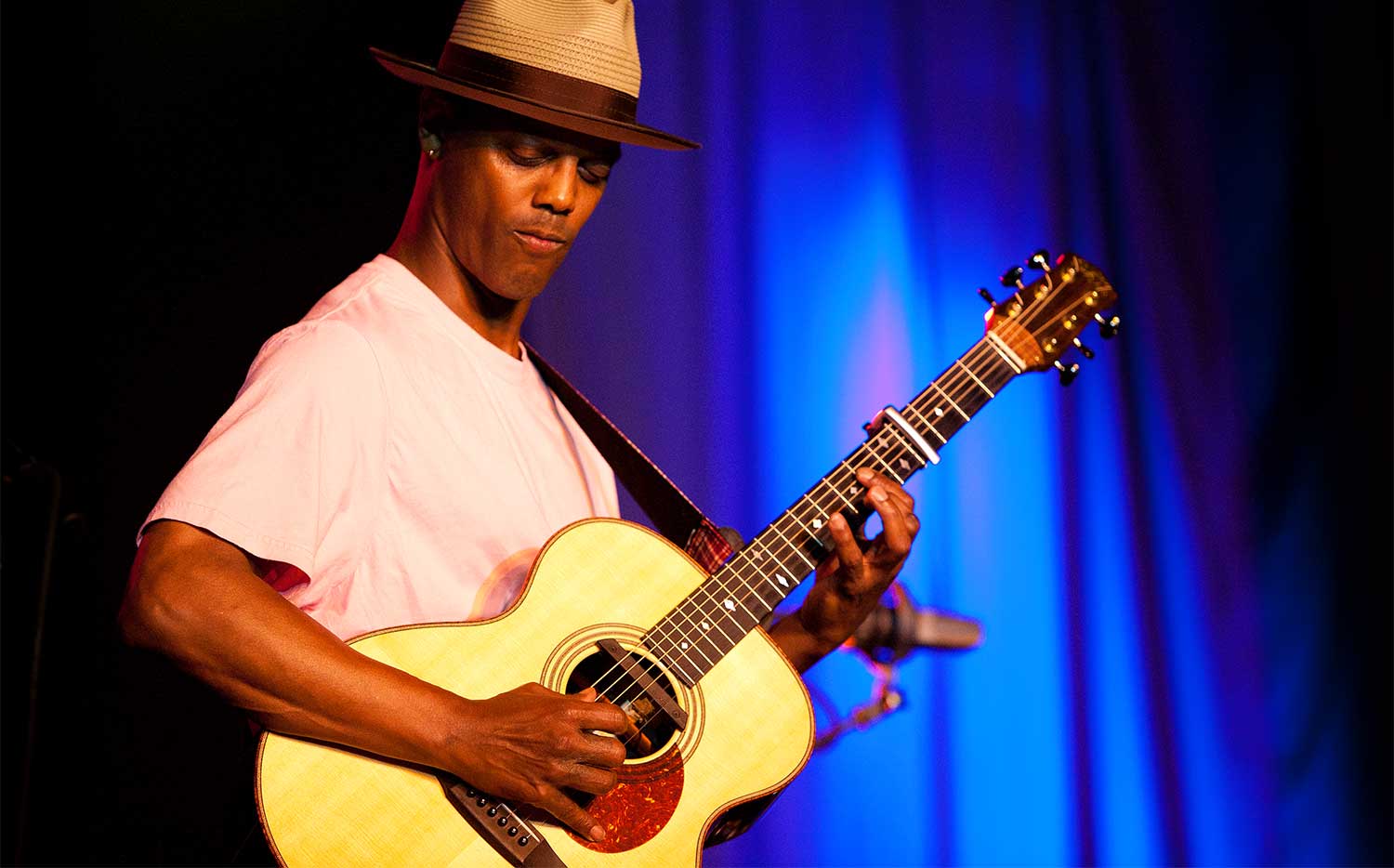 American magazines are being very kind to me at the moment, here is Eric's tuition recording from 2010, reprinted in this month’s Acoustic Guitar magazine, played on his Fylde Signature guitar. Doesn't time fly? (LINK TO ARTICLE)

When I first started making guitars, ragtime was a big thing, and nearly always in standard tuning, possibly a dropped D once or twice, but I've not heard ragtime guitar played in "a tuning" before. I couldn't fault the sound or the feel of the piece and wondered what the background was, so I asked Tris ...

"I’ve been using the modal, CGDGCD tuning almost exclusively for a number of years now, originally because of its aptitude for backing tunes in trad sessions and for accommodating fingerstyle arrangements of traditional tunes. I’d never really considered it as particularly appropriate for certain other styles of music where more “busy” chord harmony is prevalent - jazz standards or classical works, for example. However, after sufficient noodling, other paths will eventually be trodden and where there’s a will, there’s inevitably a way to fit any tune to any tuning. And so I tripped over the opening few bars of Scott Joplin’s ragtime classic, "The Entertainer", unaware at first that a modal tuning would fit it so pleasingly. After pulling the thread hard enough I came up with an arrangement that seems to work pretty well - the root-and-fifth bass notes are easily handled on adjacent strings at the same fret (the bottom three strings being tuned to 5ths), and fragments of melody whose notes are next-door-neighbours in the scale can be found side-by-side on those close-tuned treble strings. If you fancy having a bash yourself, the full tab and notation is available on my website. And let me know if you have any requests for future arrangements - I relish the challenge!" 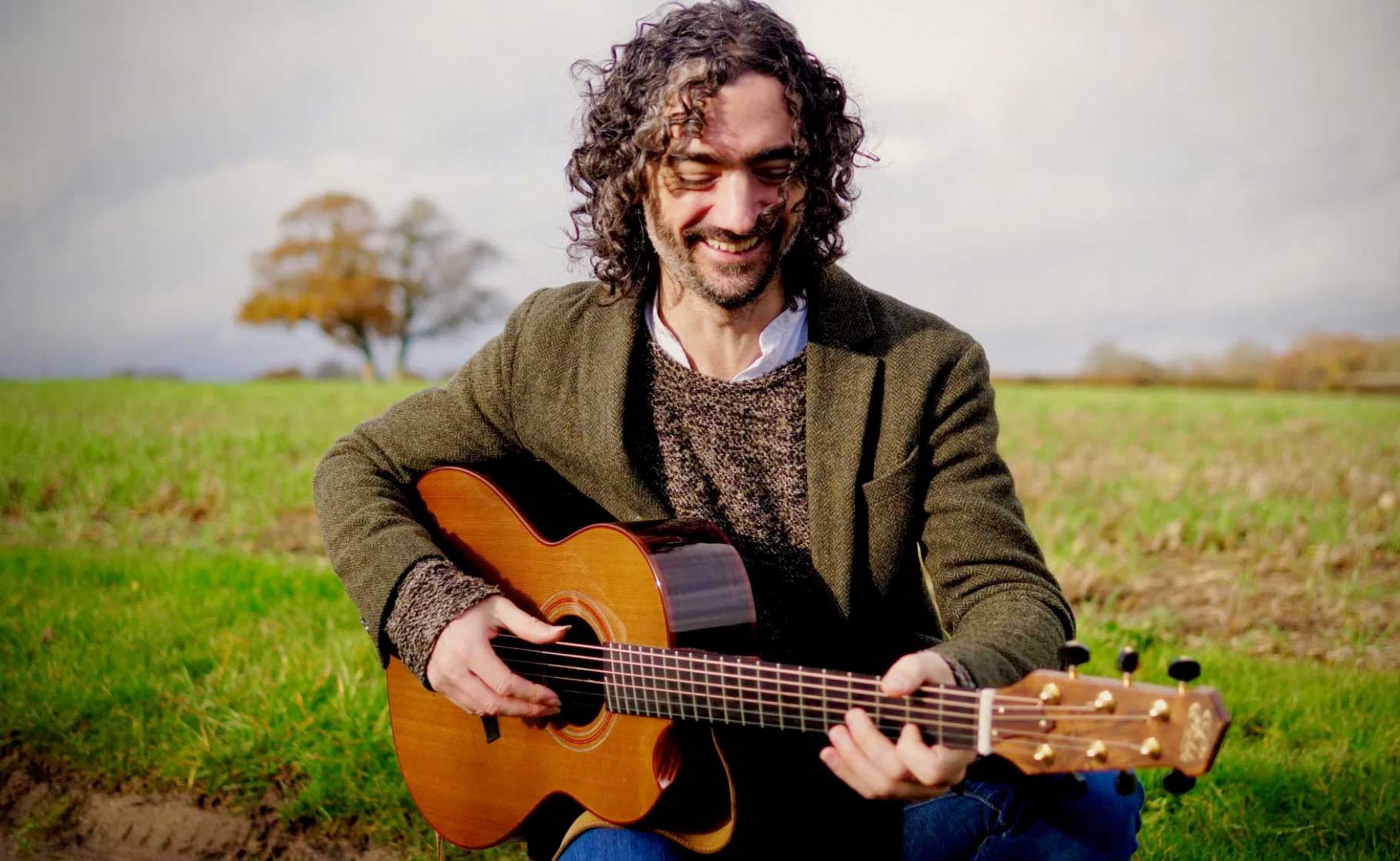 And here is even more from across the pond. Maybe I should emigrate? Tris again, featured in the current edition of Acoustic Guitar magazine in the USA. Written by our good friend Julie Bergman. (LINK TO ARTICLE)

I've been pushing Tris to put more music "out there” ever since I've known him, and all of a sudden, he is popping up everywhere. There are now new videos that I haven't used, and If I leave it much longer, they will be out of date.

This one is timely; Tris tells the story in the video. Since this happened last week, I've remembered that I made this little guitar about 25 years ago, at the same time that I built my current pool table, from the same wood and using the same finish. Tris and I have played on that table many times. Isn't that strange? We decided that it might be called Lavinia (the guitar, not the Pool table, that would be silly), as Lavinia had no tongue. Horrible story, I don't think I could bear to watch the play. Titus Andronicus by the way, so you don’t have to look.

Oh good, back in England, rain and snow. I'm always looking for new videos from Remi. He's been posting lots of very short instructionals recently, so here is something to get your teeth into, if you like playing with your teeth that is, that was Hendrix wasn't it? Sorry, it's been another hard week.

Billy has a new CD available, you can see that below, but first, here we have a sneak preview of one of the tracks on another CD which he is preparing, part of a collection of rock covers on fingerstyle and classical guitar. 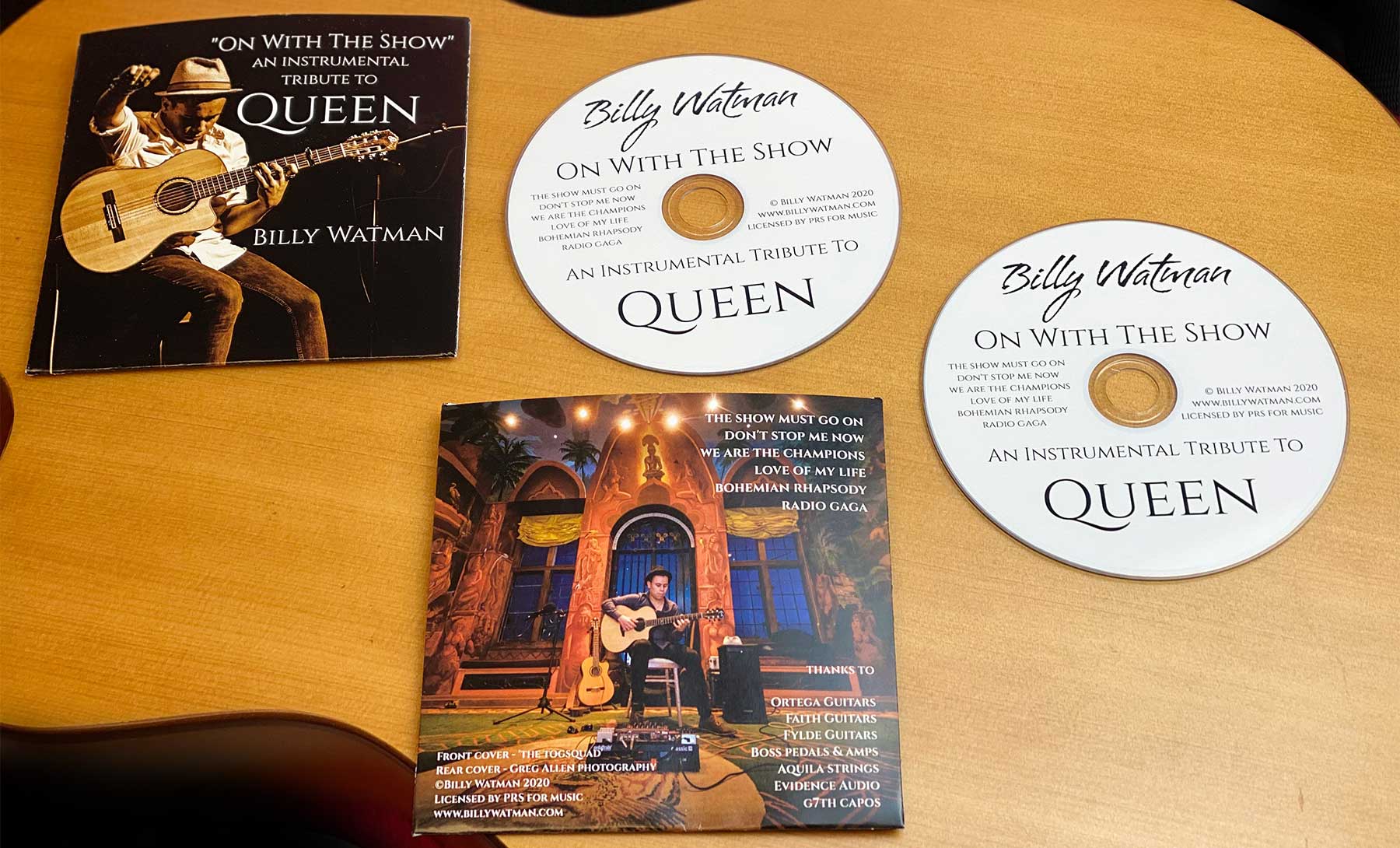 This from John Watman:
"---- the Fylde is on every track in one form or another, it's become his go to guitar for recording, he's already making good progress on the next CD which is 9 rock tracks arranged for acoustic guitar and it features heavily on that too." 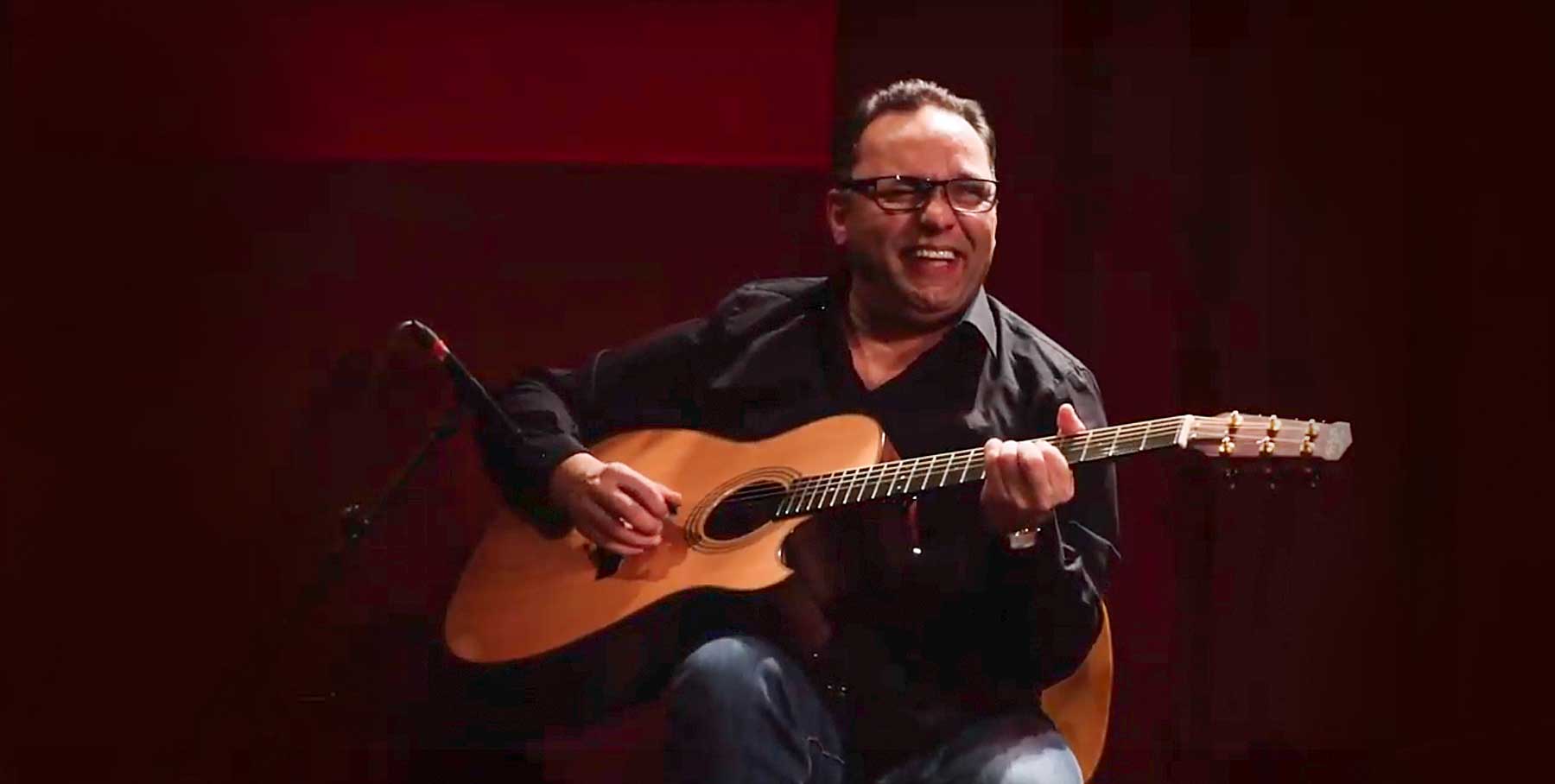 I had an enquiry from a French musician last week, attaching this extract from Guitaremag.com, in 2017

In the “green room” of the Django Reinhardt Festival (Fontainebleau, 2017), just after his concert with the Ponty-Lagrène-Eastwood trio, Biréli shows us his new guitar, a custom built Fylde model “Falstaff”, handmade in the master's workshop of English luthier Roger Bucknall. It is through the intermediary of the guitarist Adam Palma that Biréli falls "in love with this guitar". This guitar is distinguished by "a unique sound and quite incredible playability". Equipped with the Stage Pro Anthem system from L.R. Baggs and connected via a Fishman preamp, it allows him, among other things, to express himself freely in the trio with surprising chords. “It does everything I want it to do, and then there is the slightly “attacking” side, which I like, says Biréli, because I do a lot of percussive things … and it works really well!” (our translation)

Madagascar Rosewood back and sides, using the offcuts from a custom Mandola that went to Germany. Just look at those colours! Bearclaw Swiss Spruce for the top, one of a number of pairs that I acquired from a special contact. That's the sort of "luck" that builds an instrument like this. It's not luck of course, it comes from a slightly compulsive desire to discover wood from unusual places and knowing where to look. I'm a "wood detectorist".

The neck is cut from a flat sawn board of very old Mahogany, "folded" around an Ebony lamination to get the grain vertical. The Ebony is matched by the fingerboard which has Abalone square diamond inlays, and in turn matches the Ebony bindings. Red lines at all borders and built into the purflings. Gold Gotoh tuners with black buttons which match absolutely everything. 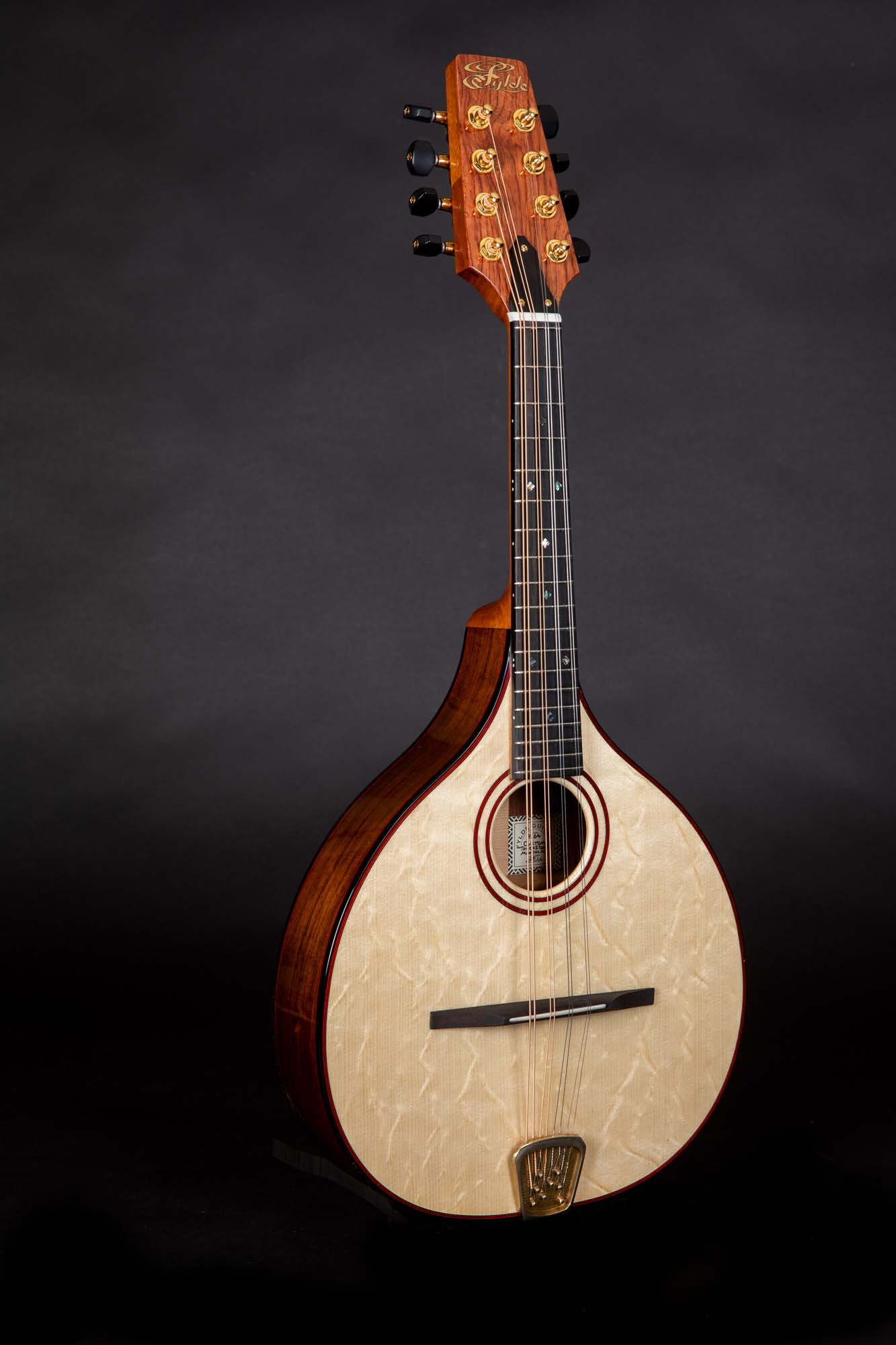 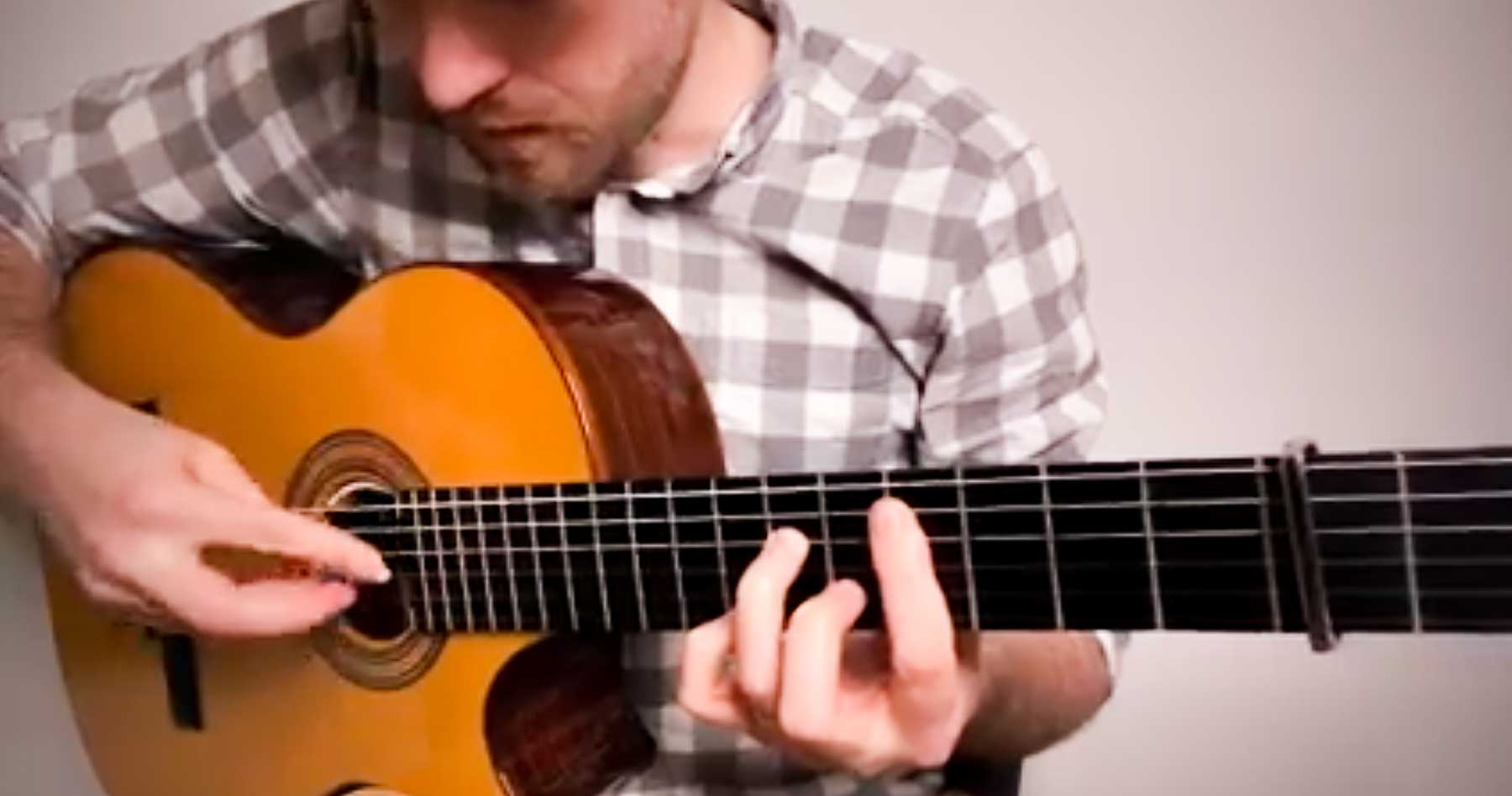 Will recently completed a couple of tuition videos for FingerstyleChina and used the trusty Fylde nylon string.  Will told me he had to consider the inevitable translation when he decided what to say.  Just learn Chinese Will! (LINK TO FACEBOOK PAGE)

David is a friend of Tristan and owns his old bouzouki. I think the mandolin belongs to David's flatmate. Obviously a very well-connected bunch of people.

I've had to leave some space between Tristan's piece and this one, otherwise this would be the Tristan Seume Newsletter, he's a good friend but there are limits … it’s my Newsletter,

That's twice Michael's interviews have popped up on my radar. Not that long ago there weren't many steel string guitarists who could hold this sort of conversation, it was so rare to hear any "theory" and it's great to have been part of this advance over the years. There are several clips from Ben's album "ECHO",one of which features Laura Hockenhull, whose dad used to work at Fylde Guitars

Lisa is always good value, but this time, we have six Lisa's, a Fylde Ariel and a Fylde Touchstone mandolin. That's eight times more than you usually get. If every artist did it this way, it would save me a lot of time and I could get a lot more into my newsletters.

Findlay starts off perfectly sensibly, then gets all silly, the top is Cedar, not Spruce, he knows that, and I think he recorded this a year ago! Findlay - did you spend a whole year editing out all the sensible stuff?  I love it.

He forgets to mention that it's a "14 fret Ariel", not many of those around. 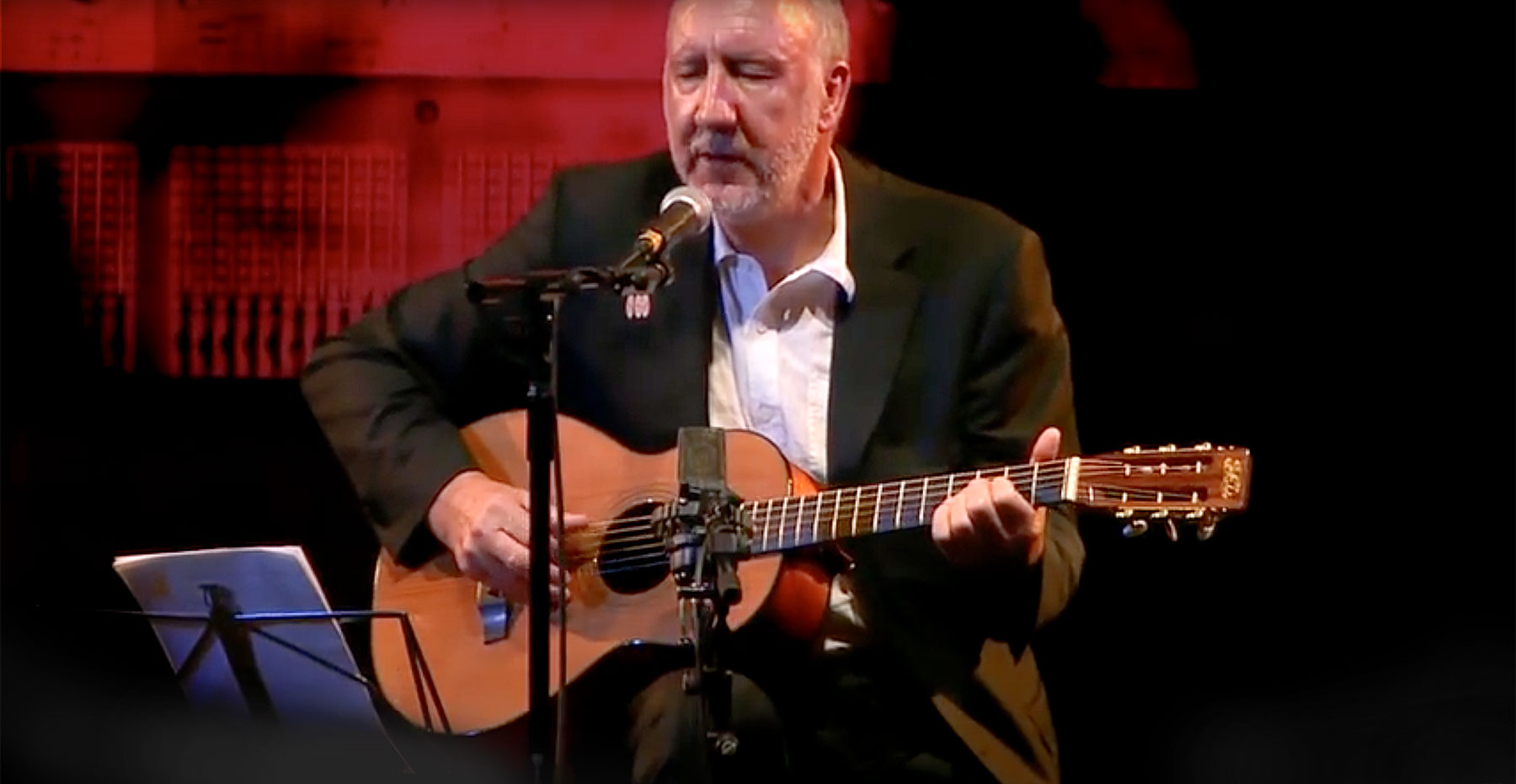 This song brings back a lot of memories, it's been covered so many times by some of my favourite artists. Bob Dylan is sometimes credited, but I'm sure it goes back a lot further than that. (LINK TO VIDEO)

Pete is getting a huge sound from such a little guitar - one of his five Ariels.

I don't know what it is about me and slightly quirky dance videos, I love them. Comes from being married to a Ballerina perhaps. Well, someone who is tall slim and elegant, likes to dance and is often in a spin, it's much the same thing isn't it? (LINK TO VIDEO)