A very special order for a customer in the USA. I'll explain the design features before I talk about the woods and tone.

Comfort in playing was top of the list, every edge and corner has been  "Bevelled" to stop all those conflicts with various body parts, and the neck has been carefully discussed. The customer has found that the only necks that suit his needs are on guitars made by Jim Olsen, but Jim doesn't offer the other essential features. The obvious answer was to contact Jim and discuss his approach to neck shaping and he was very willing to chat. In fact, we have been swapping photographs of our Gardens as well. Talking to other makers is not something I usually enjoy doing, but this time it's been fun - I've found another friend!!

The bevels on this guitar are made from Claro Walnut,  none of them are thin veneers, that would have been too easy; some parts are three or four millimetres thick,  bent and pulled into shape, others are carved from bigger, thicker pieces , the key being to anticipate the difficulties and plan accordingly.  I think I've explained my procedure before - careful thought, patience, and lots of heat, moisture, muscles, and swearing. The bindings are bordered by delicate marquetry inlays.

The back and side are African Blackwood, the Soundboard Italian Spruce, and the neck is laminated from Claro Walnut and Mahogany with two strong lines of Ebony. Abalone fingerboard inlays and coloured marquetry purflings. The sound is typical for this combination of timbers - I would describe it as "clean and pure". A package of beauty, tone and comfort. 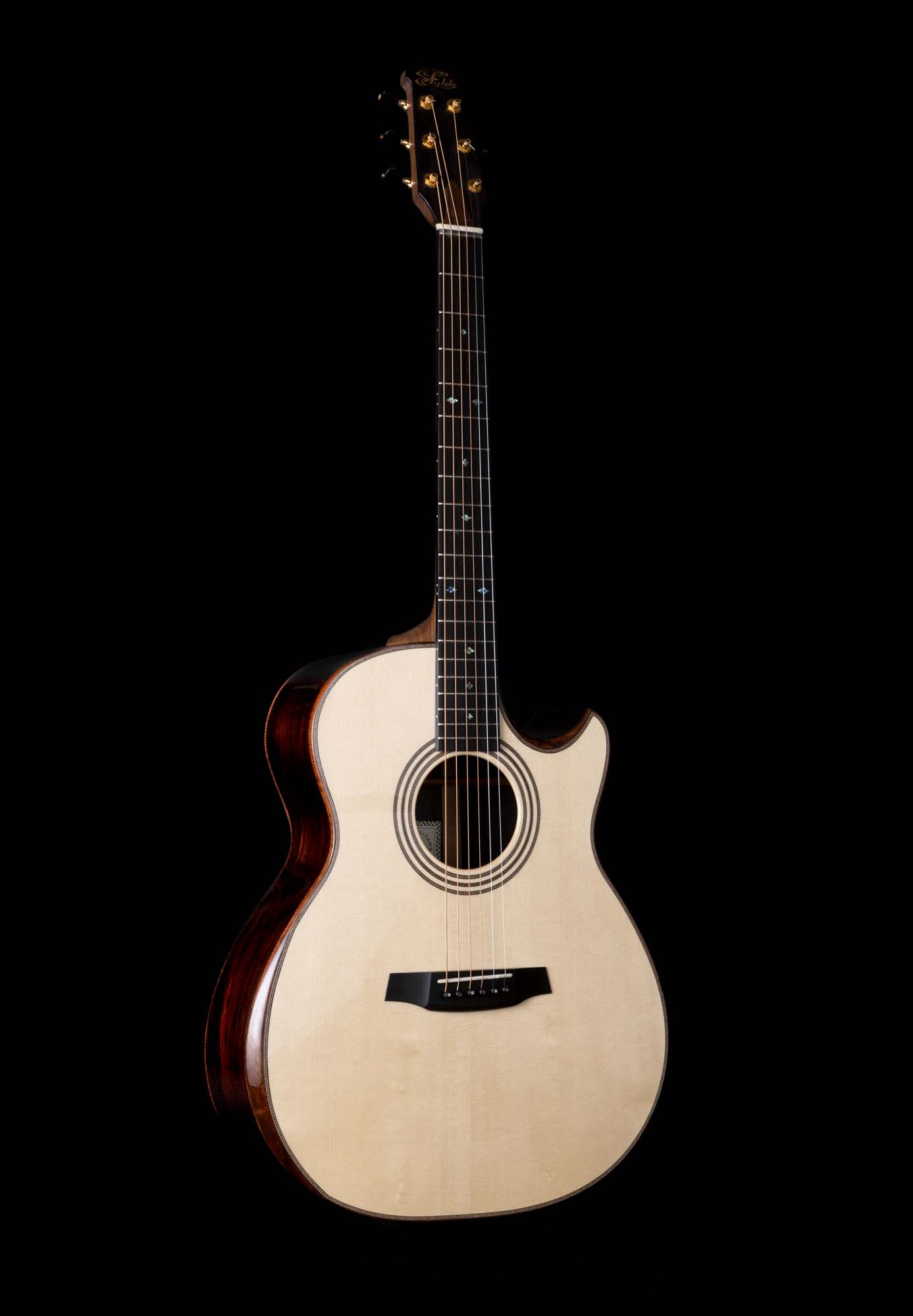 A Falstaff guitar, made in 1977, 45 years old, quite a "find" actually, just come here today so no time for "proper" photos or any tidying up.

Original " fixed" neck, 45mm wide, quite a deep rounded shape rather than the more common slight Vee shape from that period / it's the older type of construction, laminated down the centre with a thin black line. Nice and strong with no damage. Schaller M6 tuners,

The neck is dead straight, It has been refretted and reset very recently.  The soundboard is from a time when traditional timbers were not available to me. I suspect its Hemlock, which isn't very common in guitars, but those "in the know" value it highly, it's not as stiff as Sitka Spruce, but stiffer than European.  The centre seam has been repaired and splinted, some time ago, I think. The repair is completely solid and visually not obvious

The other damage is to the base, near the strap pin, it’s been repaired at some point and is completely solid. It looks a lot worse than it is, and I think we'll spend a little time on it to make it look better before we send it out.  The guitar has a good action, and sounds amazing, big and strong.

A very worthwhile guitar, probably ideal as a "workhorse". I think it's worth £2,000, including original hard case but I'll ask for £1800 ono. SOLD 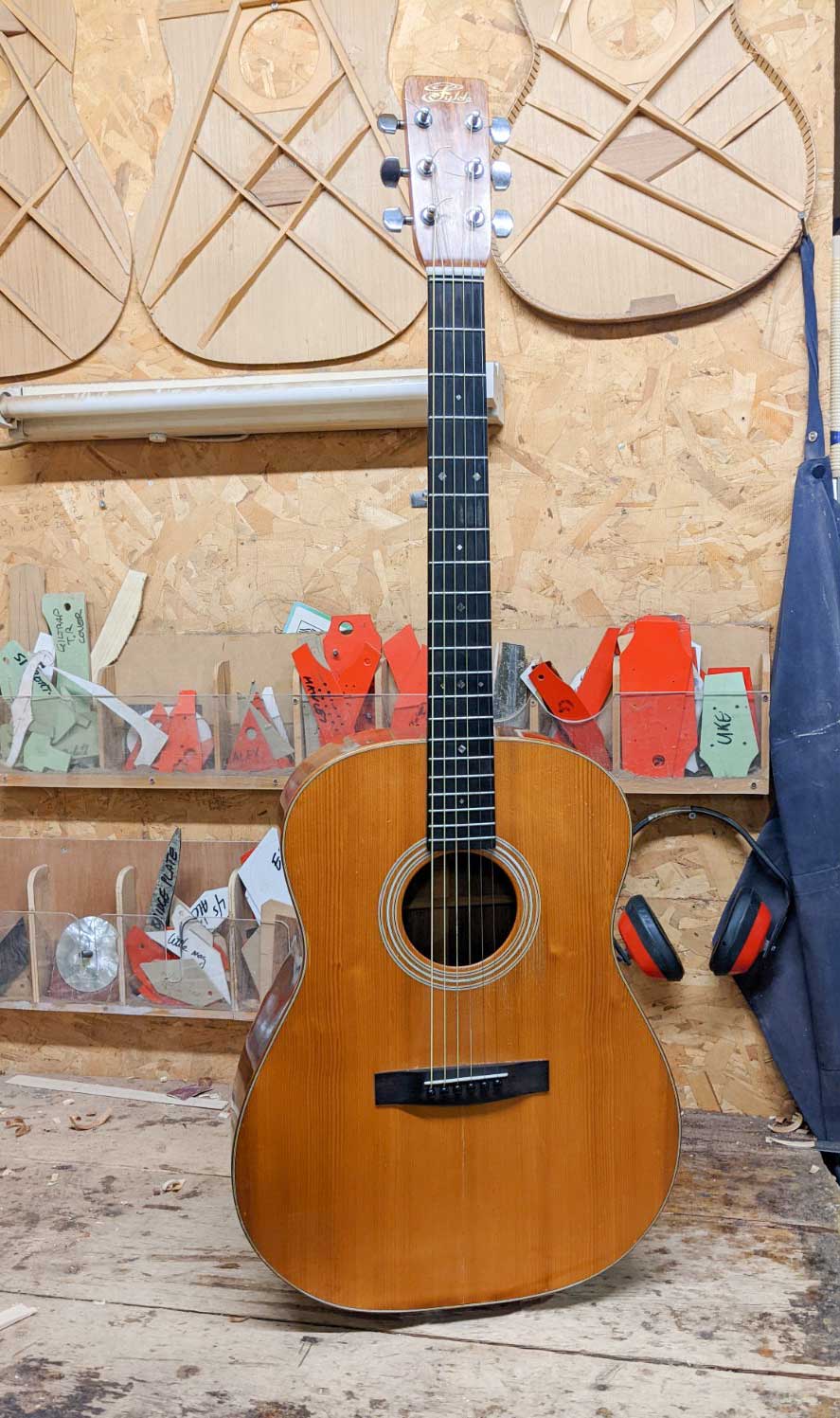 It's amazing what can be found in random net surfing, I've no idea how I came across this one. A Fylde Touchstone Bouzouki, full frontal no less.

I'm wondering if Irish Dancers ever manage to knock over a table full of drink??  It must have happened, surely?  It would certainly happen if I was dancing.

No, it's not a knitting pattern, or the wiring for an old radio.

It's three distinct pickup systems that we are fitting to Martin's "Indian Orleans" guitar, not one system at a time of course, he wants all three in one guitar!

For many years, Martin's famous amplified sound has been based around Highlander pickups, but they are no longer being made, and he has discovered the equally excellent “K & K” pickups that are fitted to his Taran guitar. He also loves using his vintage DeArmond magnetic pickup through a Fender amplifier. Three systems, one with a microphone and one with a soundboard sensor, so actually, that is five individual "sources" which he can mix and match as required.

Simples - ask that idiot Bucknall to fit them all.

It's not easy. All pickups have their individual quirks and difficulties, particularly around keeping loose cables and heavy metal connectors from rattling around inside. If we could climb into the guitar, this would be simple, but I learnt my lesson on this fifty years ago when I actually got my arm stuck inside Martin Carthy's guitar (true, read the book). This time I spent a lot of time drilling holes, making special cable clips from Velcro and planning a sensible procedure, then passed some of the life-threatening parts to Alex. The final stages were back to me with Paul holding scalpels and retractors and making tea with Valium.

Does it work? I've no idea, I don't have a five-input amplifier, but I've noticed that Martin has sacked his bassist, drummer and keyboard player so he must be confident. 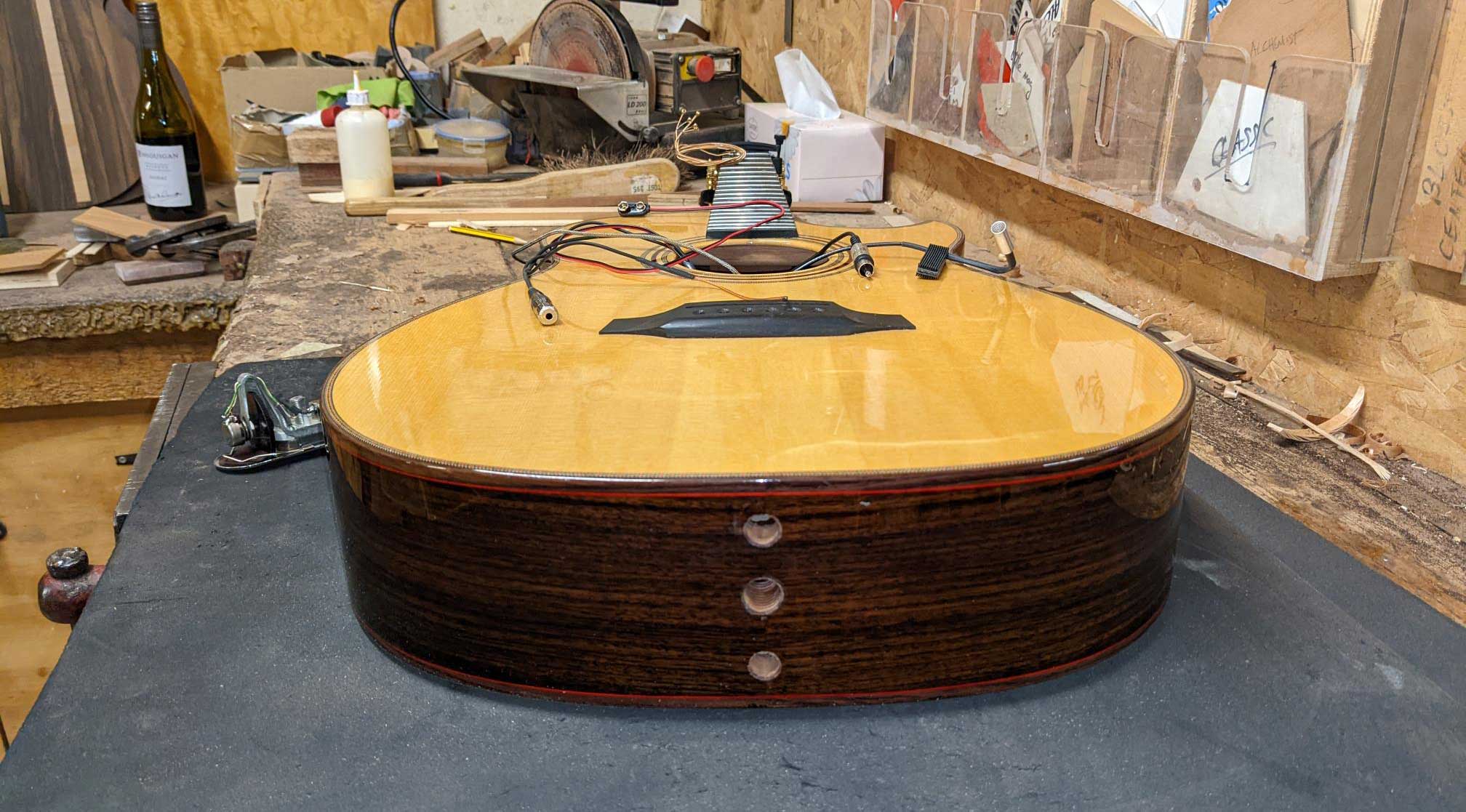 Here is a pic of Richards Hawley's new guitar, and of his new case, and of the case's lining, and of the new pickup and of the strap pin... 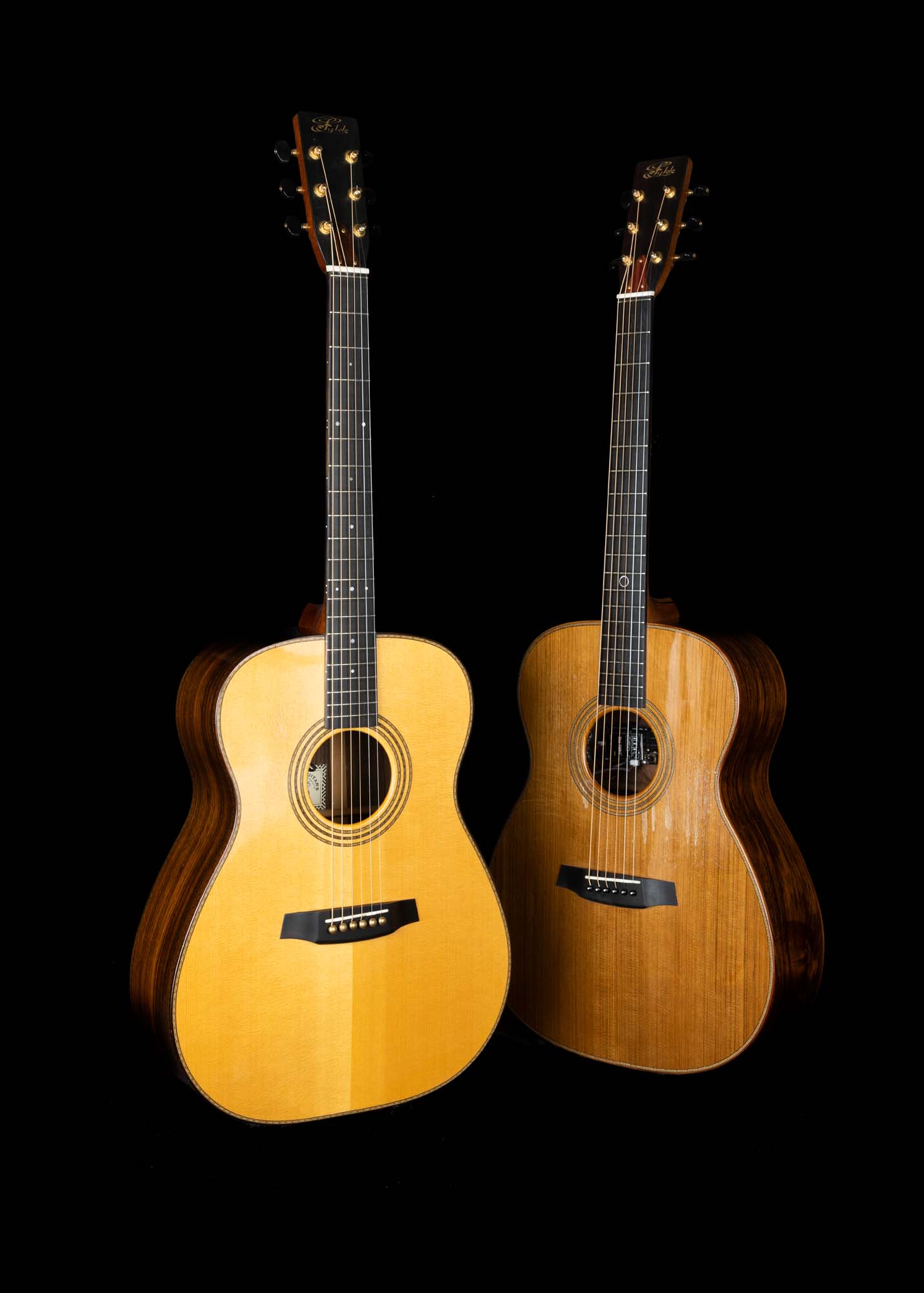 John left his two Falstaffs with us for a while. Then had a quick drive up and down from Wales to collect them. He'll be off on his USA tour before too long -- it's all starting to open up again. Hopefully. Maybe. 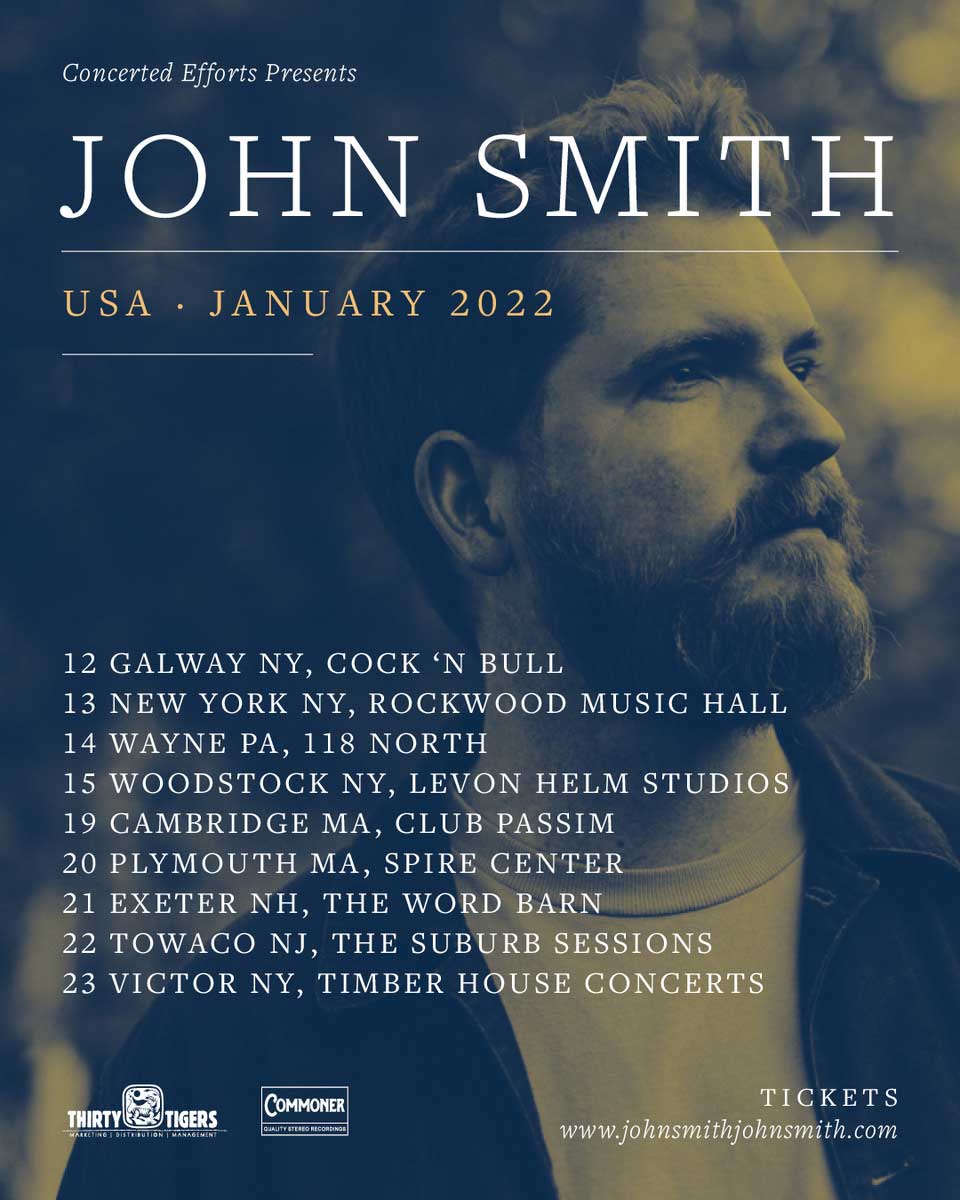 The pictures and video are from five years ago. Tris has been agonising over this for some time, but sometimes a decision has to be made, it's not being played, he is selling his beloved Fylde Banjola.
It's the very first one we made so we are all a little sad.

The fingerboard has a frailing scoop, and the fifth string is guided to its' tuner in a tunnelled brass tube. 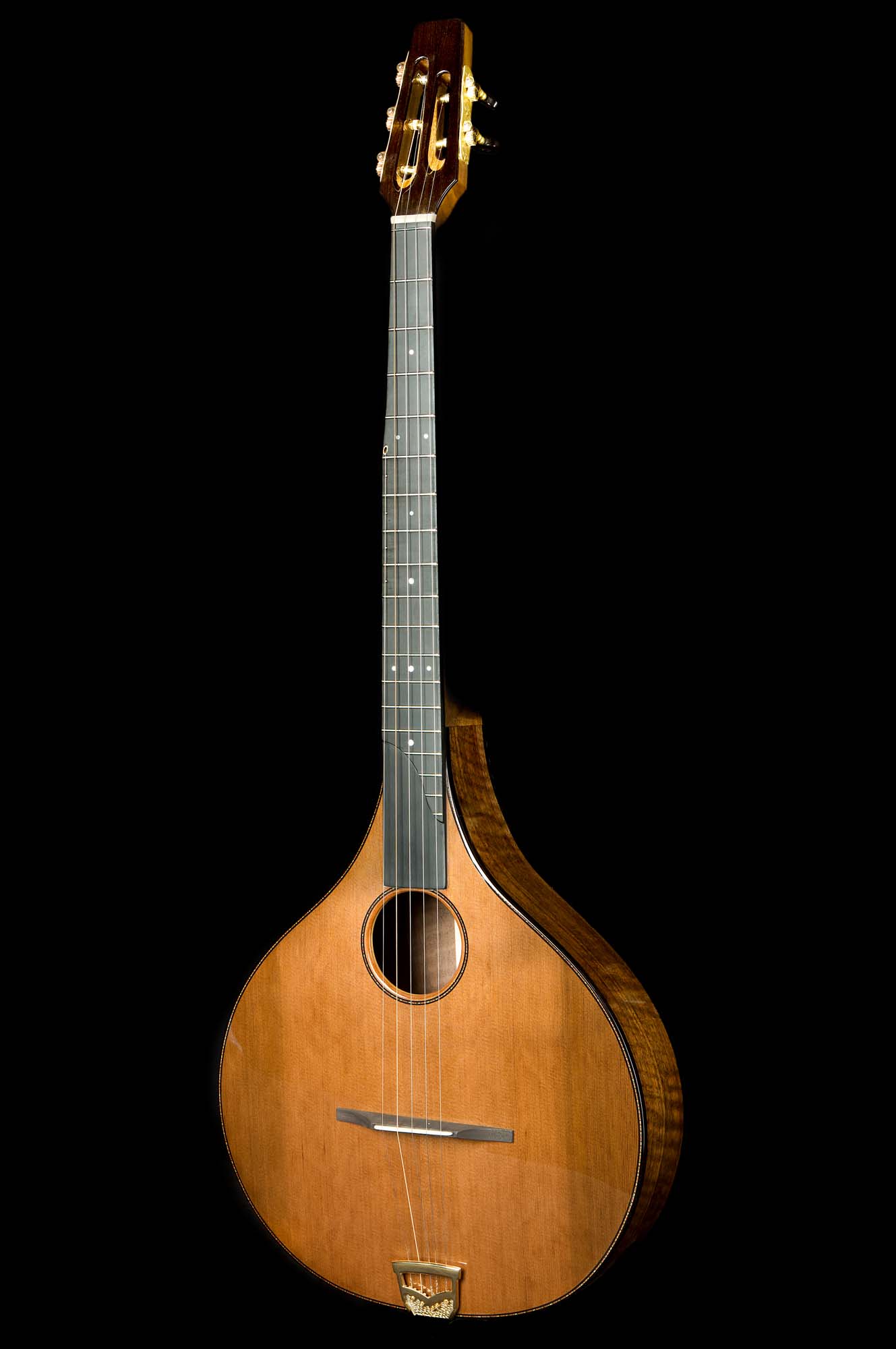 Arlen is really getting to grips with his new guitar now.

"I sure am loving the Fylde.....can't wait to be able to do my European tour....a good friend has got me booked in Cardiff, Wales and of course, I'll be all over the UK, Spain, Italy etc., if only this damn Covid would stop!"

We'll all try to get to see you on tour Arlen. Maybe we'll hire a bus.

"The Michelangelo Foundation for Creativity and Craftsmanship is an international non-profit organisation that celebrates and preserves master craftsmanship and strengthens its connection to the world of design. We want to help people rediscover the ability of the human hand to create, and support those doing it best: the exceptional contemporary European master artisans using long-held traditions, skills and knowledge to make beautiful objects of lasting value. We are named after a beacon in this field, Michelangelo, a visionary artist and master artisan who embodied both creativity and craftsmanship at the very highest level of excellence."

"Roger, I am reaching out to you because you represent excellence in craftsmanship and we would be delighted to include you in our selection."

Actually, they reached out to me several times, but after looking at some of its members and the work they do, I didn't think I would qualify, so I didn't respond. But they kept on asking, and on their third request, I did. I think it was Mikes photos rather than what I said that did the trick. I made sure that the photos included Alex and Paul's hands as much as mine!

You can see my listing here

So I am now featured in the “Homo Faber Guide”, a digital platform that aims to showcase the best craftsmanship of Europe, they have an upcoming event in Venice - maybe, just maybe, we'll be able to go. Click here for more information on the Venice event

I can hear Moira saying something in the background, it sounds like. "Try and stop me"

Gerry Rafferty died in 2011, this posthumous album "Rest In Blue" was compiled by his daughter Martha and features contributions by many of his friends, amongst them Hugh Burns, heard here playing his custom Fylde Ariel. 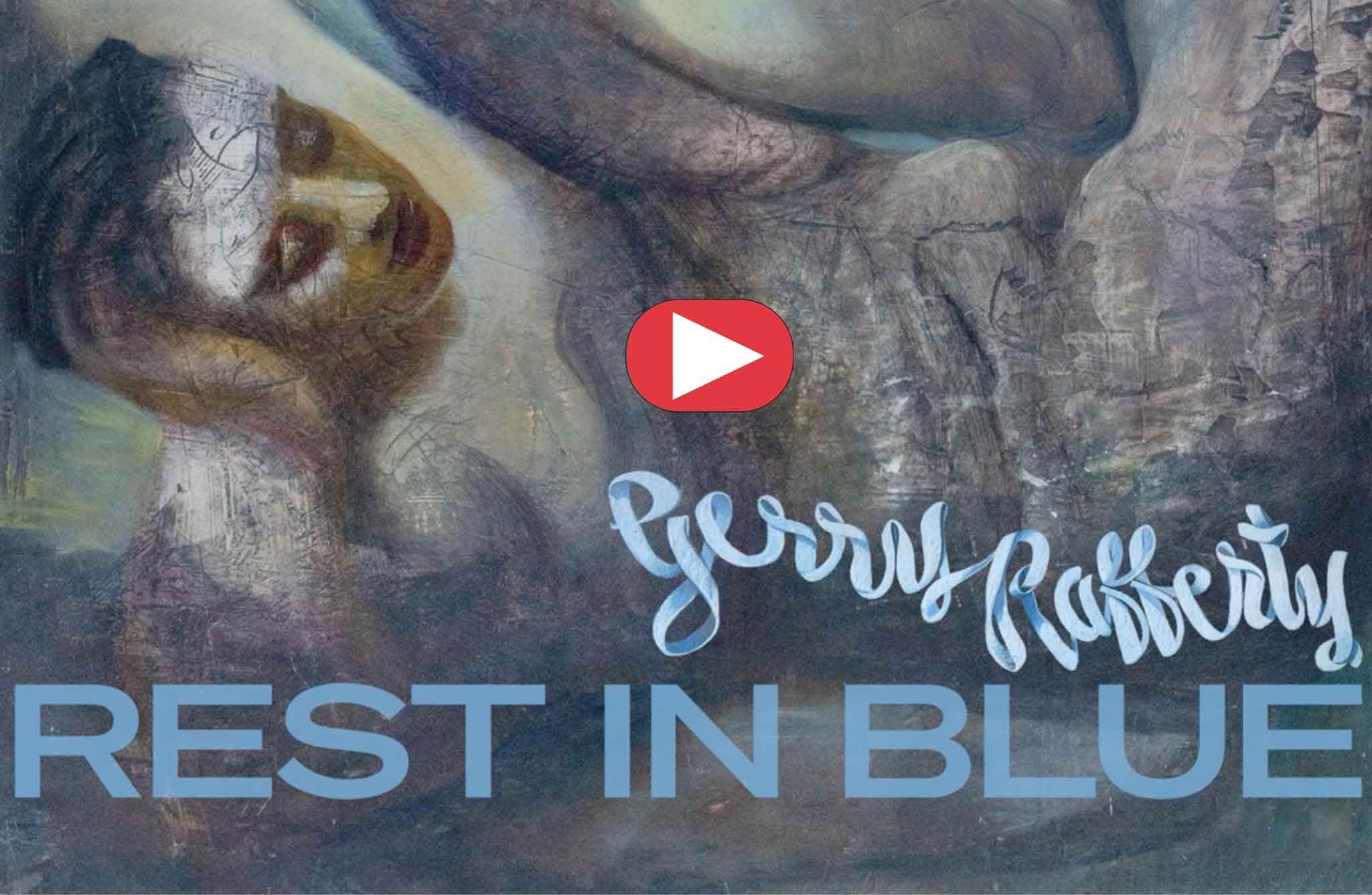 Dan is of course, first and foremost a banjo player, but he has learnt to play one extra string now.

Adam never stops, he always has something to show us.
Adam's Website

Skeet is always welcome,  more so if he brings a friend.
Skeet's Contact Information

and another tune from Chris, this guitar sounds so good!

You remember David?  He's the guy that makes his living "down the pit"- the orchestra pit at various West End shows, currently the Tina Turner show which we do hope to see again before long.

This uke will take his Fylde count to six. The body is made from Claro Walnut, I don't need to cut up full size guitar wood, because I usually buy wood in logs or boards rather than single sets, and I have a lot of smaller sizes. Likewise, for the Sinker Redwood Soundboard. The neck is made from Walnut, the bindings from Brazilian Tulipwood, and the fingerboard from Snakewood!

So now I'm wondering if I can get a video of David playing his Fylde Ukulele with Tina Turner singing? Any requests? 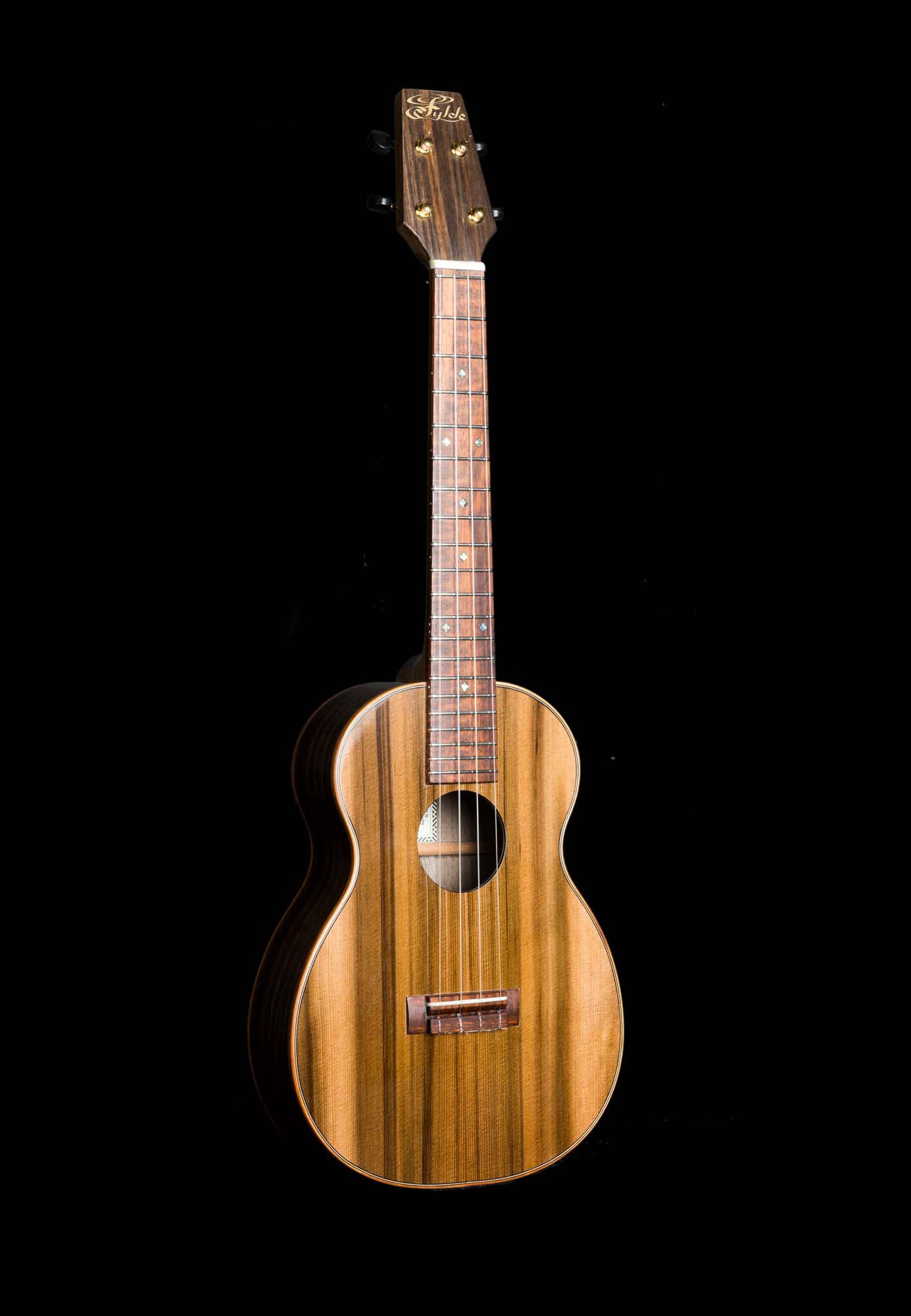 A common story, the customer wanted something a little different and I wasn't going to discourage him. Mandolins are such a convenient shape, they can sometimes be made from guitar offcuts, and it means that we really don't get much waste. This time though, that's not what happened. I love Bubings in small sizes but find it a little overpowering in guitar sizes, so I was happy to cut the best parts from a full size "set", concentrating on getting the best figure. The top is Bearclaw Swiss Pine, part of a small batch of unusual wood I acquired by a special contact in the tonewood business. The bindings, neck lamination, fingerboard and truss rod cover are black Ebony, contrasting splendidly with the Bubinga and framed by red border lines.

"It really is a thing of beauty and the craftsmanship is so evident. You must be proud of yourselves producing such amazing instruments for the price you do. Can't thank you enough." 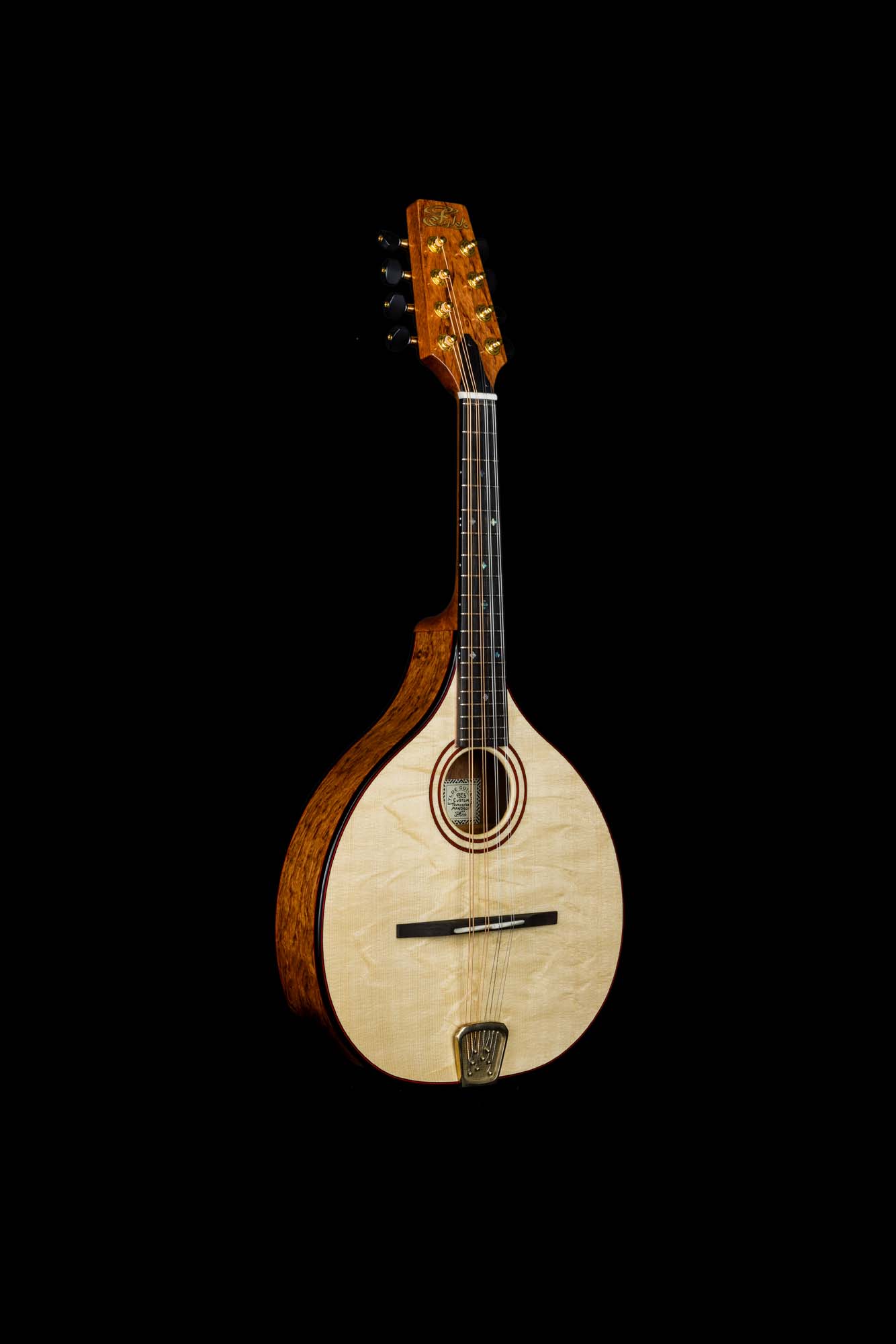 This is a very recent YouTube clip, but I think I have seen it before - never mind, it's very good!

It's very important to me that all our friends and customers maintain excellent eye sight, so I'm very pleased to be able to offer you all this eye test, free of charge. If I find any other test concerning other aspects of your health, please be assured I will offer them to you without any cost to you. It's OK, you don't need to thank me, I'm that sort of person.