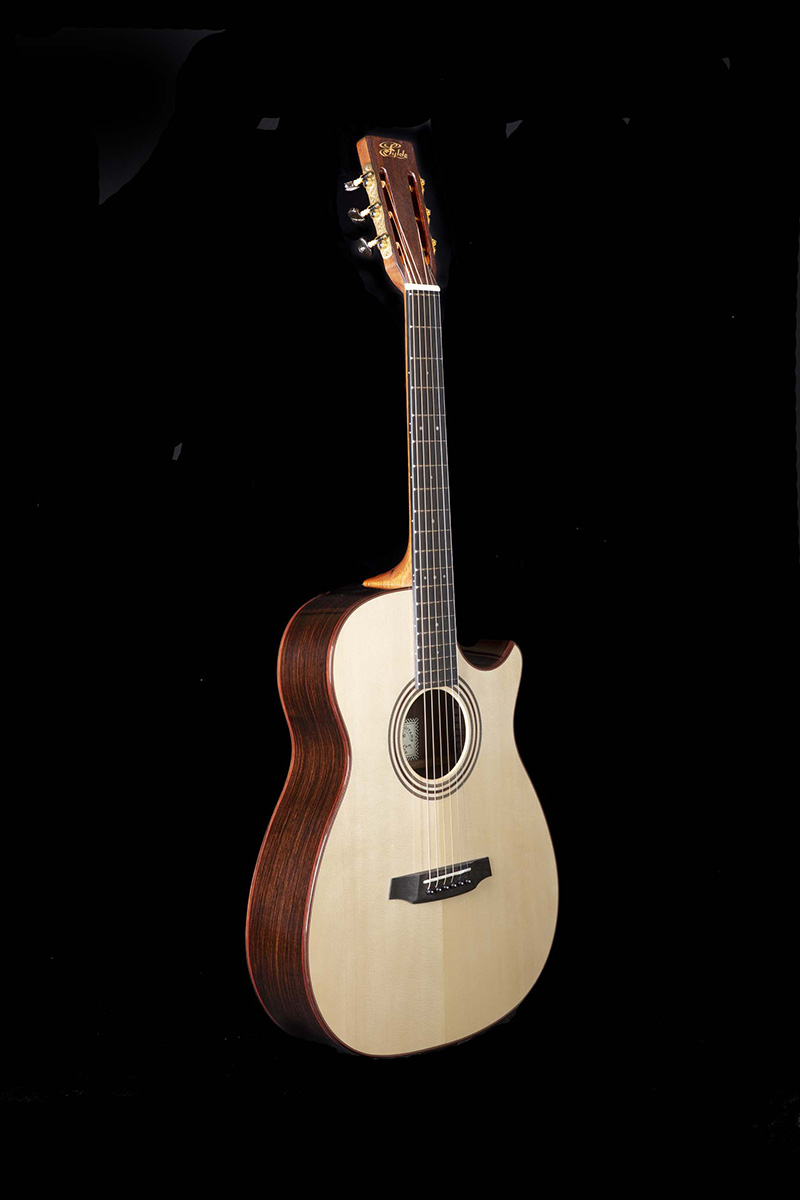 A beautiful guitar, stunning even, with a story attached to it

Martin Simpson and I have been talking guitars since 1975 and one way or another he has owned quite a few Fyldes. Three years ago, after we recorded "The Instrument Makers" for Radio Four together, we made a plan over a little drink and a little food. Martin had some thoughts and I had some thoughts, so we made him a guitar. We had more thoughts, so we made another guitar. Then we had some more thoughts and we made him another guitar, it's a weird way of working but we both enjoy it. We have had more thoughts since then, but Martin has to buy a bigger house first.

I want to make this guitar more often, it's such a lovely thing, and I needed a name. I've had a particular Shakespearean character in mind for a long time "The Bastard of Orleans" (sorry, that's a straight copy from Shakespeare, don't blame me). It's such an evocative name, but probably a bit harsh and it doesn't "scan" very well anyway. I will point out though, that the term was a mark of respect at the time, a Royal acknowledgment of an illegitimate son. We saw the play, Henry VI part one, at Stratford, it's a very powerful play, but the amount of saliva flying round on stage would have closed the theatre nowadays. We were in the front row, exceptional, never seen the like before or since. Anyway, back to the story. It so happens that Martin lived in New Orleans for quite a while, which has to be fate. The idea was so simple that it's taken a long time to sink it, we both agree that the "FYLDE ORLEANS" is splendid name and very appropriate. I've missed out the other bit, because Martin is a very very nice man.

The starting point was a 12 fret Falstaff body size, but reduced in depth and with a cutaway to restore high fret access, a wider neck and a shorter, 629 mm scale. The early models had no metal components in the neck, just four sections of carbon fibre reinforcement continuing through the neck into the body. Since then we have made several variations and we are still developing the details. Im inclined to use an adjustable neck in future unless the customer has strong opinions. Martin thinks these guitars are the most comfortable to hold and play that he has. Even with the relatively heavy Rosewood and Spruce, the weight and physical balance are a delight.

Im putting this in to our "standard" model list, because its a very worthwhile design and i want it to be "seen and heard" but I suspect each one will include slight variations discussed with the customer.