The Ariel is a wonderful size and shape and covers a much wider musical range than you might expect from such a small guitar, plus the choice of possible timbers is so much greater because of its size. This time, it's figured Claro Walnut and Sinker Redwood, with a little bling from Snakewood bindings and exotic Gotoh Tuners - aren’t they lovely?

Chris is one half of the duo "Ida Mae", with his wife Stephanie. They work mostly in the USA, then come home to refresh when they can.

He was put in touch by John Smith (hooray), and we have since discovered a number of other connections. It was very easy to decide what guitar to make for him by referencing various pictures and videos.

Chris made this little video for us, it's a snippet from one of the songs from their new Album . 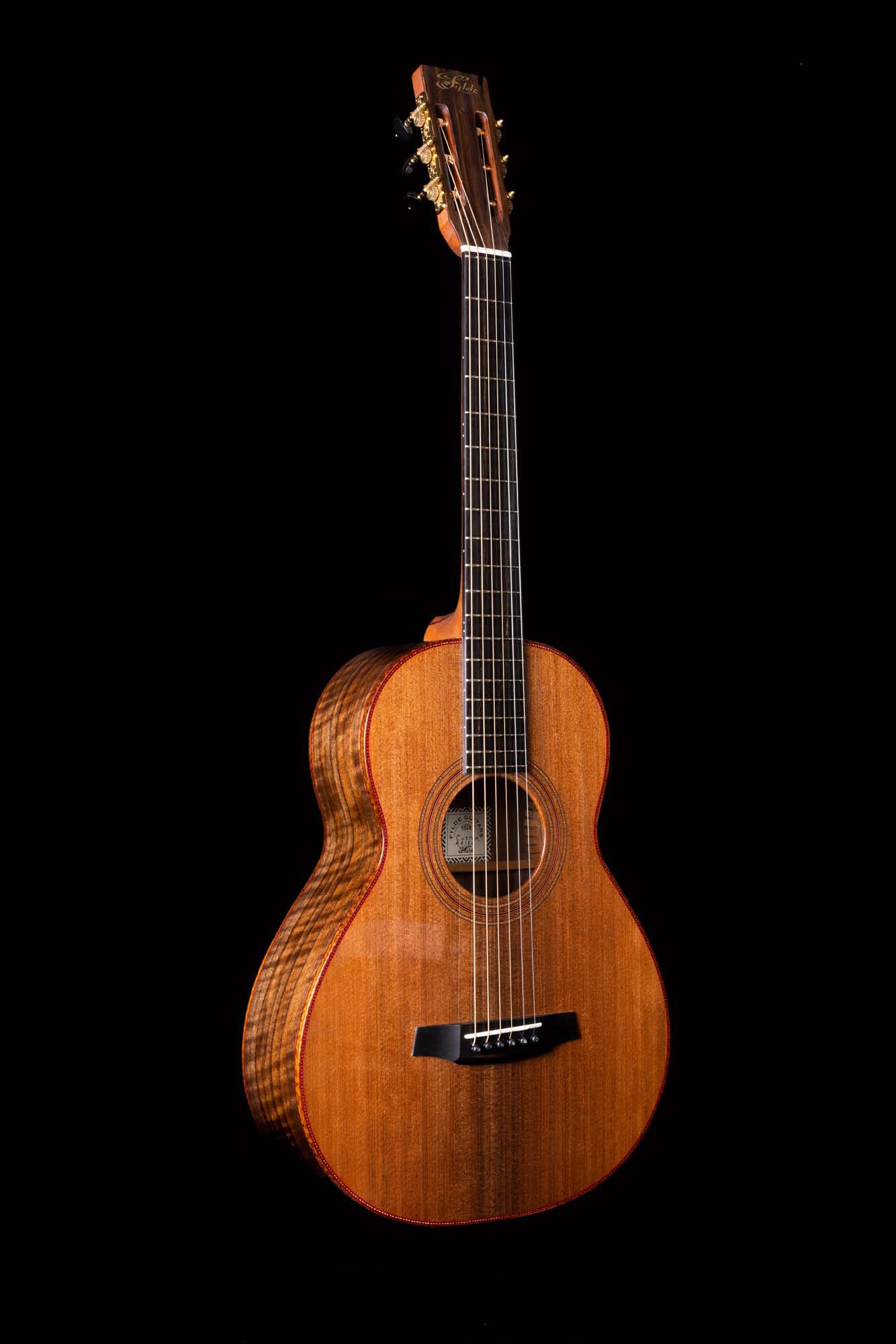 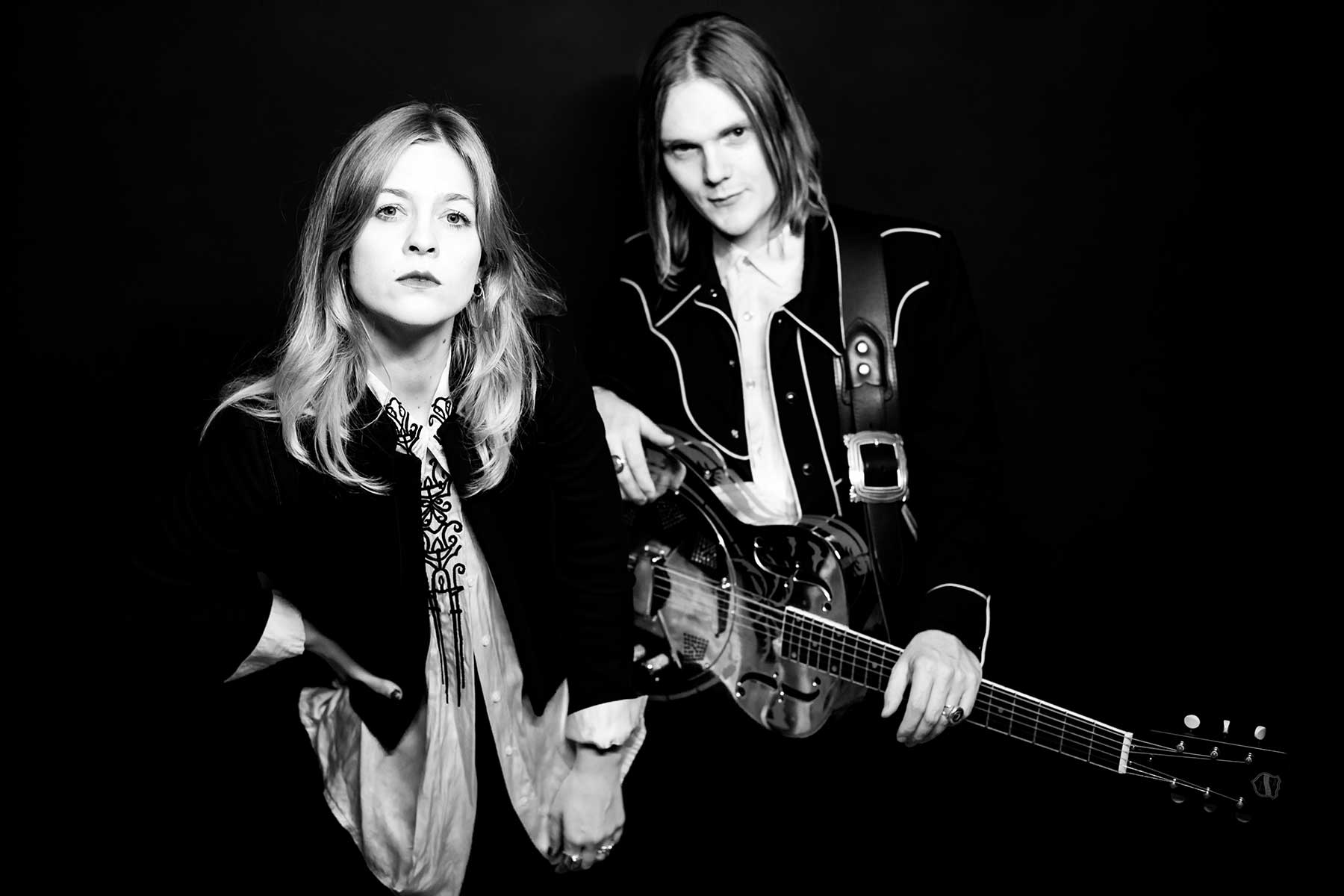 "Goodness this guitar records well. YouTube has compressed the audio somewhat but you certainly get the gist. I think it sounds amazing. With the microphone choice the low end is huge.  I've called the guitar Rita...not entirely sure why but she is lovely.
We'll be out across the US on Little Feat's 45th Anniversary Tour and most Excitingly on Cayamo, heading out from Miami to St Thomas & St Kitts alongside Richard Thompson and Emmylou Harris (we're the last band on the Bill but we're on there!). All in support of our new album 'Click Click Domino'" You can get it through Spotify here.
You can find out a lot more here on their Facebook page

A lovely tune made famous by Tony McManus, I've heard him play it many times. The last time we were at Ullapool, Tony's arrangement was the subject of a discussion at the "after show" party. I've always found it fascinating that versions from two different players are recognisably different even when playing the same dots. Here we have Will's own particular "take" on it. I think this is a little more "lullabyish" in timing than Tony’s, and the guitar sounds are different of course.

It's been such a long time since the last festival in 2019, I wonder what will be different in 2022? Everybody will certainly be three years older, which in some cases, is more significant than in others. I think it's time I started going backwards. Moira say's I already am, I'll be a toy boy soon, can't wait. 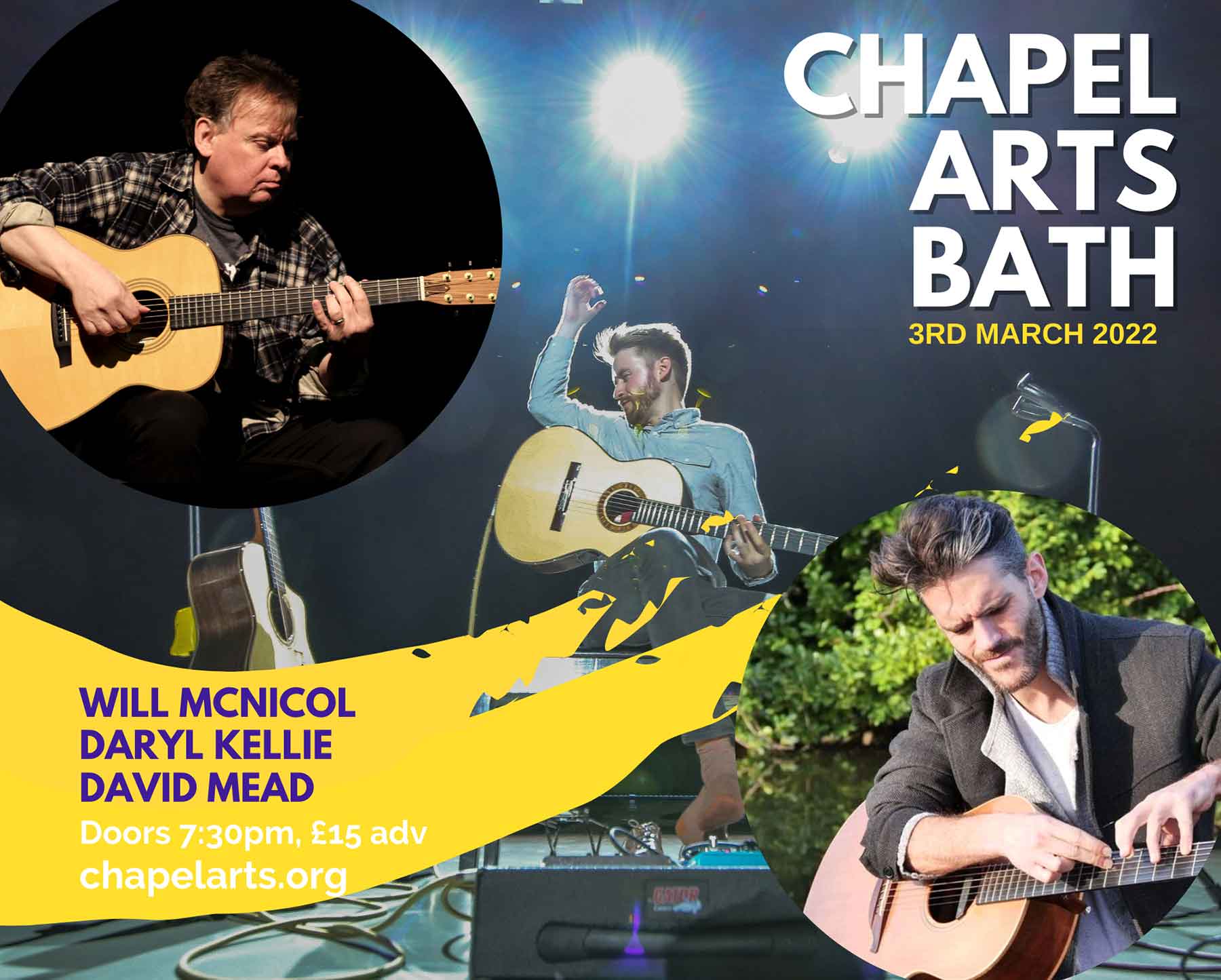 Will is appearing with another Fylde player, David Mead, alongside Darryl  Kellie.

Link to Will on Patreon 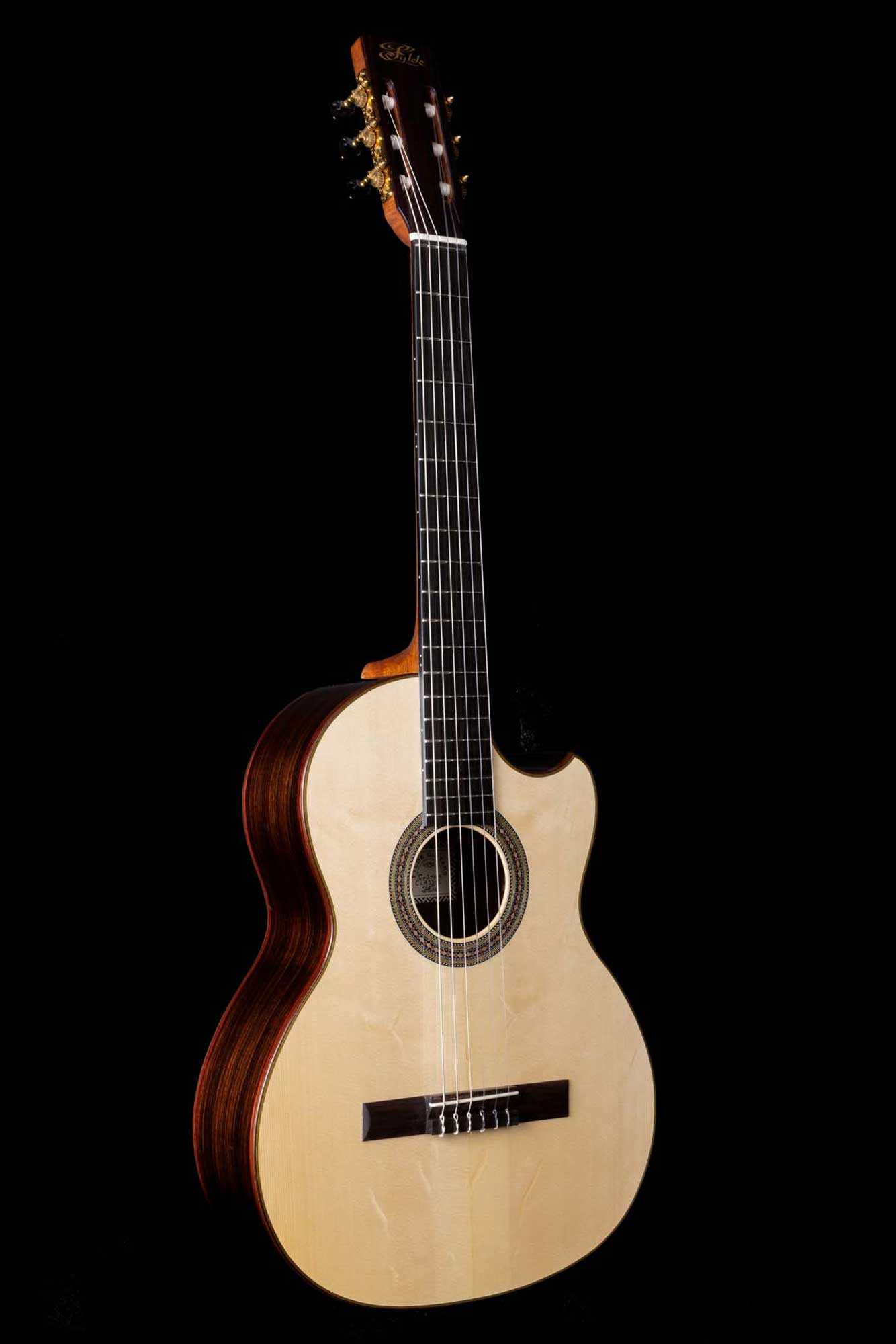 We made this for one of Will’s online students in America. Who would have thought, a few years ago, that you could teach guitar to someone on the other side of the world? Hopefully I'll be able to show videos of its new owner playing it before too long. 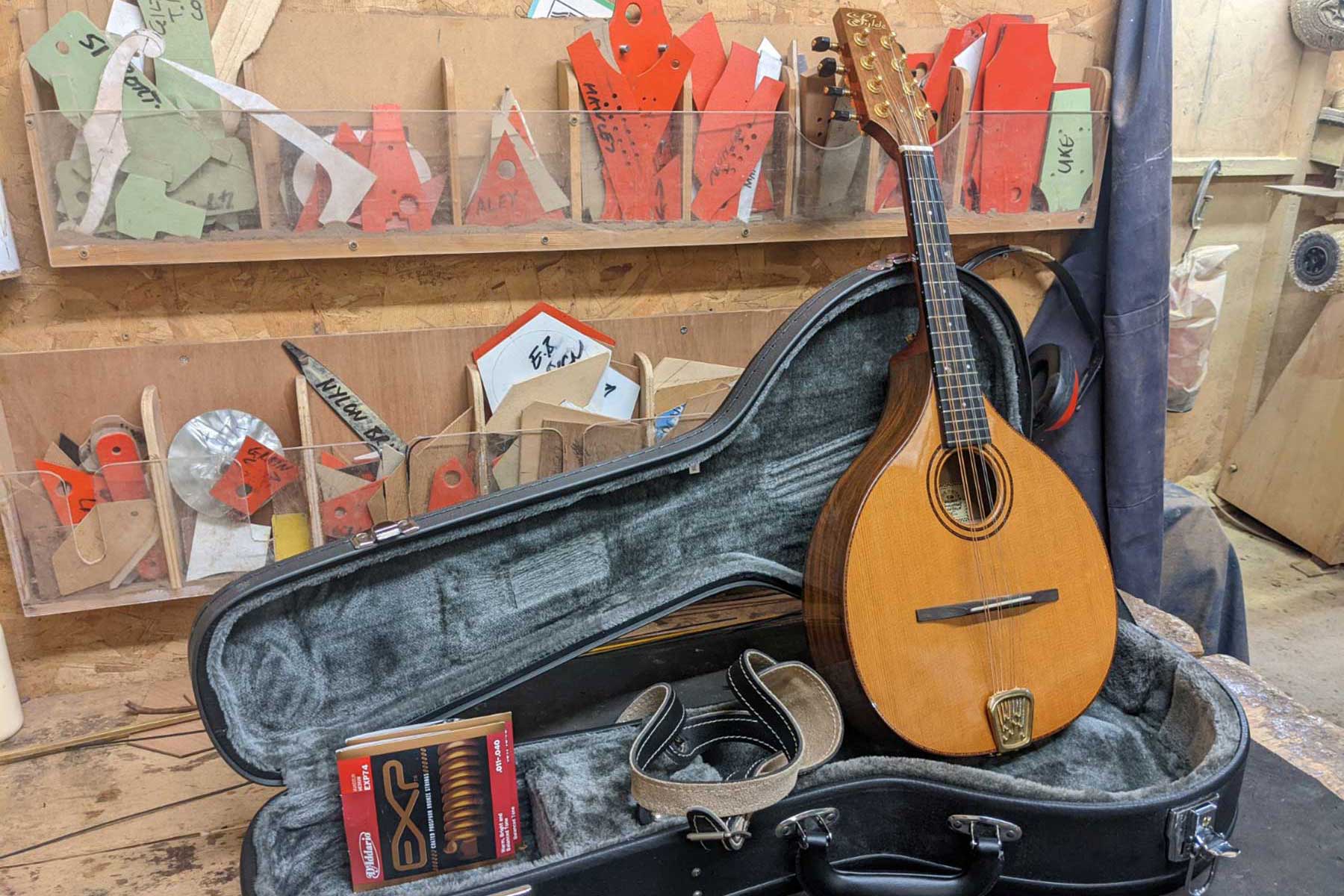 Hardly used, one tiny mark in the front which we will try and remove before sale.
Complete with Headway pickup, case, strap and spare strings, New, this would all add up to over £1800 and a five-months wait.

How on earth should I pronounce. Sangshyttevalsen? My first attempts don't sound too good.

A video from last year at the Country Music Hall of Fame in Nashville. Arlen is still enjoying his Fylde." Thanks so much for making this a better year, musically and otherwise"

Alex found this one. I wonder when they will add the robot's left hand. This might put guitarists out of a job but even robots still need a guitar, so guitar makers will be ok

If you think you recognise this piece, it's probably because it was Remi's contribution to the "Strings that Nimble Leap" album in 2019. Jamie Cullen featured the track a couple of weeks ago on his radio 2 show.

Remi has a lot going on at the moment, a whole new album, and a new tour.  He recently guested on Martin Taylor's Hangout event on Patreon.

and here you can see Remi's fingers. There is a lot more on Remi's Facebook page.

Info on Remi's book, music and tour dates on his website

As you may know, I’ve always loved teaching, and so this April 1-3, I'll be holding a weekend of acoustic guitar workshops at the stunning venue of Reymerston Hall, a gorgeously-renovated Georgian manor house deep in the Norfolk countryside. There are six beautiful bedrooms and 12 acres of lovely grounds to enjoy, as we'll have the place to ourselves. Nice.

The pictures look rather lovely, don’t they?! I can’t wait!

Head over to my workshops page for more details.

Tris sold his Banjola (see last month) to a musician in San Francisco and did all the shipping and paperwork by himself. (Well, with a bit of help)

I've offered him a job as Chief Packer and tea maker, with benefits and pension and everything, he’s not interested. 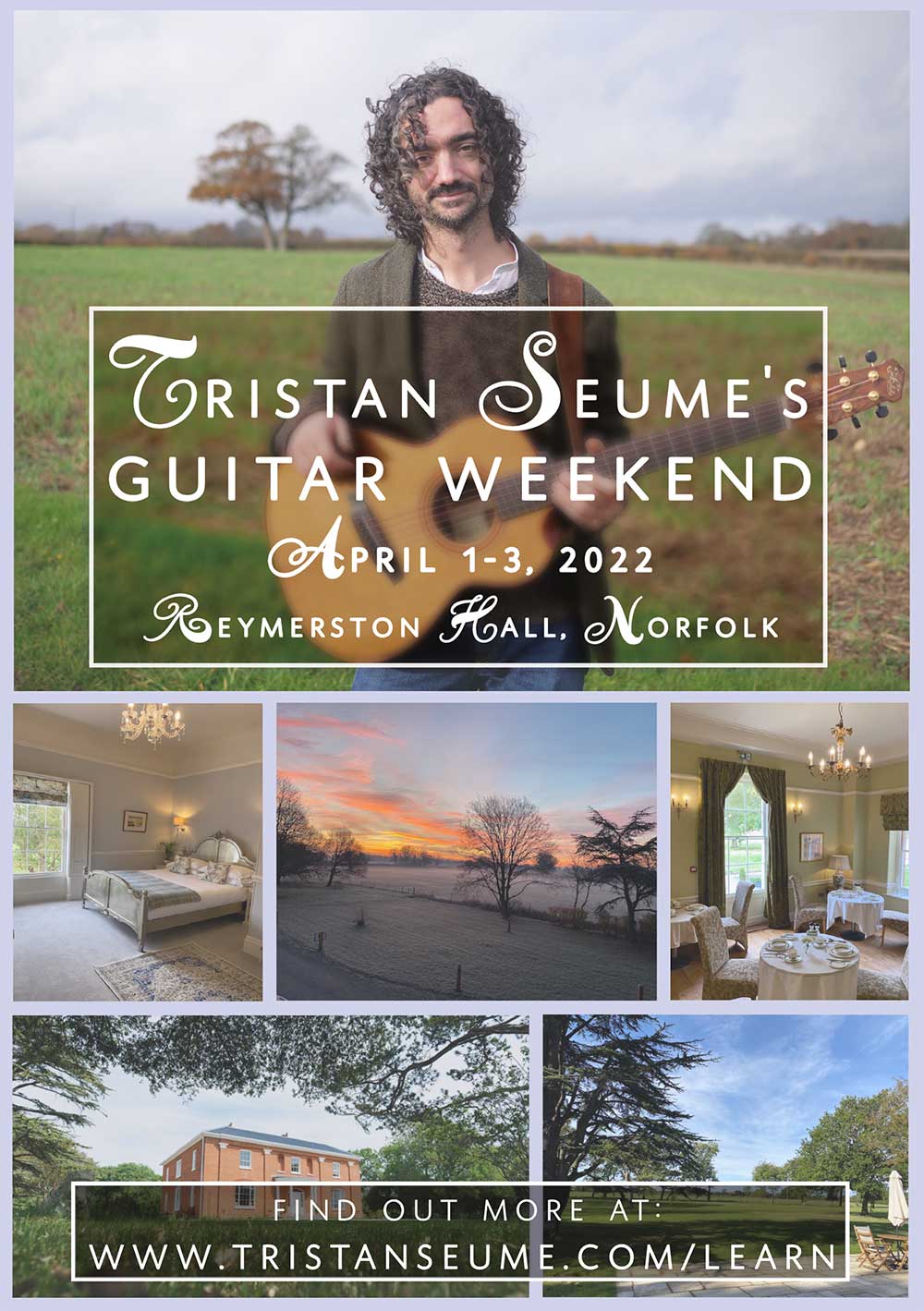 On the album sleeve, Bill Leader wrote "produced by Roger Bucknall", which I think was a bit of an exaggeration, but I was certainly in the studio while most of the tracks were being recorded and had some input into various things. On this track I wanted to push the Sir Toby Acoustic Bass higher and higher in the mix, and Bill wasn't so keen, I think he was worried about his expensive studio speakers. If I could go back to it now i would push the Bass even higher.

If you can wind the volume up, you'll see why I liked it. Mind your speakers.

Nic played the bass much like he played guitar on Canadee I O - sliding and slurring from below each note, it does get a remarkable sound. The guy in the window on the album sleeve is me.

I think this track was the prompt for Nic, Pete and Chris to form Bandoggs. So much talent in one place.

What a lovely heading- thank you Marla and Bruce, I've always wanted my own cabinet. Noctambule are based in San Francisco and we are getting to know them very well, bit by bit.

The title song of our latest album "Every Migrant is My Fellow" as played on a Fylde Caliban and Fylde tenor. There are 7 Fylde instruments on this album: a Caliban, Orsino, Orsino-12-string, Magician, Tenor, Cittern, and Short-Scale Bouzouki. (Representing the new genre of 20 strings of Fylde reverberating all at once.)

You can find out all about Noctambule here

Something else that I can't pronounce. What a great guitar sound though. 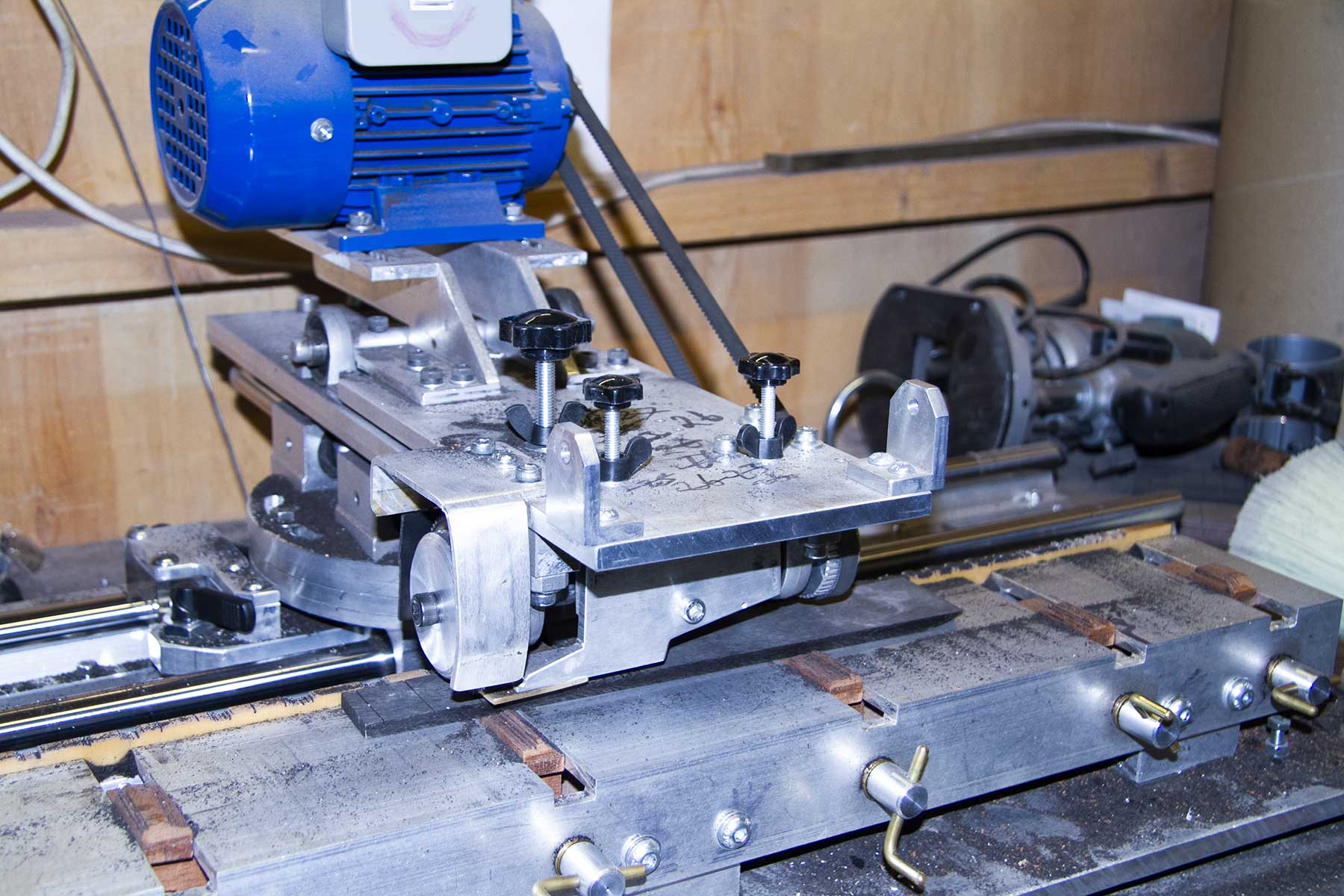 Just a little more fun in aluminium. An upgrade to the fancy fret slotting machine that I showed a while ago. I've taken the handle off to show things more clearly. The two smaller black headed screws operate a brass "shoe" running against the fingerboard surface. Now I can control the slot depth measured from the top of fingerboard, or by using the larger screw at the back I can control the depth measured from the bottom of the fingerboard. I suppose somebody is going to ask me why I need to do both.

He never bores you, does he?

“Skinny thighs and a trashy magazine” What a great line. Simon is playing the Nylon strung that we made for him recently, Suzy has the King John Bass that she bought from Joss Clapp.  Simon thinks there is still work to be done on the recorded sound of both, but I'm very pleased with it.

We had dinner with these two last week, beer was drunk, talk was talked, fun was had and new guitars were ordered.

JETHRO TULL's IAN ANDERSON Pokes Fun At Guitarists Who Rely On Roadies To Tune Their Instruments: 'What Wimps' 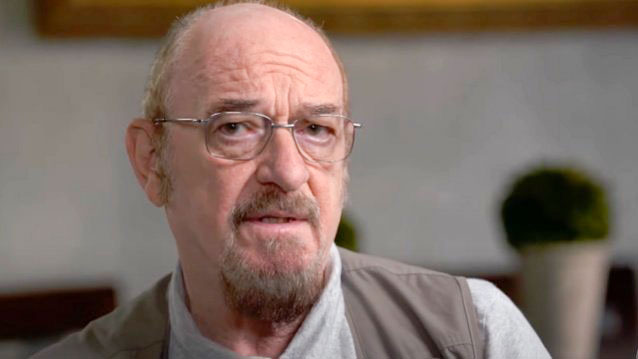 This is rather a dramatic way to publicise a Fylde Cittern.

From Penrith, to Lunigiana in northern Italy, this came back to me via a friend in New York.  Fylde links the world.

The  subtitles on the video are a lot of fun, but here is a better translation:

"THEY KILLED CHARLEMAGNE"
While the Franks sing vespers in Aachen
In the inn, the bard sings a different tune
Magnificent drinking vessels overflow with beer and mulled wine
All of a sudden, while all that's going on
A herald rushes in with the tragic news that the Emperor is no more

He must have insulted the mulled-wine merchant
In the cathedral, with great solemnity
The bishop praises his dead majesty
The name of Charles will stay with us for ever and his empire will live on
But you could say the realm is already destroyed
At the hand of his descendant Ludwig the Pious
And now, no one thinks we'll ever get back to the old ways

Years later, a new kind of strife
Yet in the bar, the song remains the same
In these walls and in our hearts, the emperor lives on
So, listen, you'll always find us here
And any who want to take Europe from us, beware,
We'll fight to the end against 'faceless modernity'
With Feudalism and Freedom

I must say, "they don't write them like that anymore"

At long last, I can now get into my Green Oak Conservatory. I'll be able to finish it off without getting wet now. The doors are made of kiln dried oak, so they need a different treatment to the "green oak" used for the main structure. I suppose it is a little confusing that I've painted them green - the green oak isn’t painted green, and the oak that is painted green, isn't green oak. Isn't English wonderful?

Stefan Sobell told me “looks like building work done by a guitar maker", which I think is a compliment.

All I need now is rain, snow and sun, and I can keep away from all of them. And a shelf for my whisky, I shan't be keeping away from that.