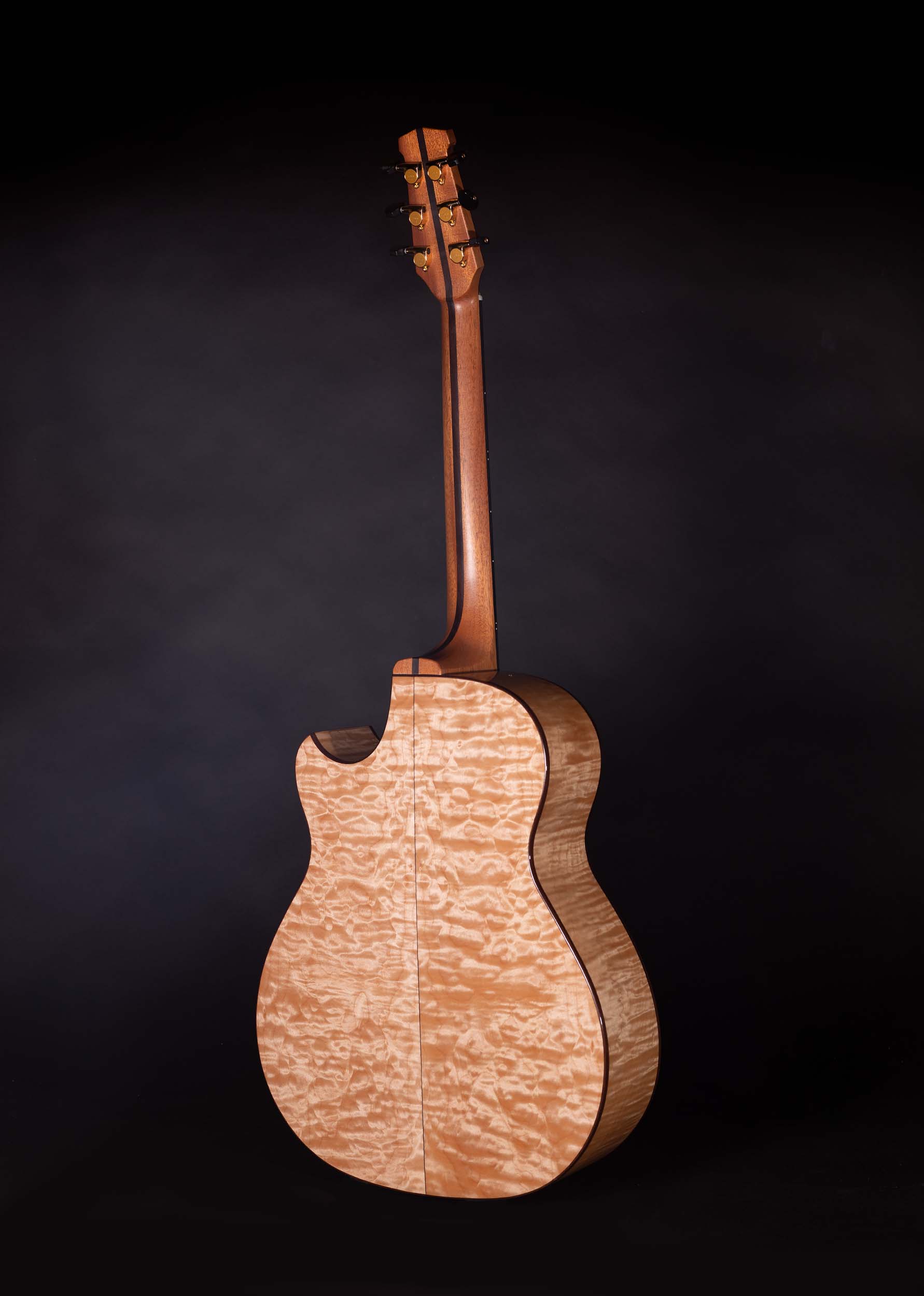 I received this letter. Blowing my own trumpet a little I can say that this is not unusual but I thought I would share it with you. A lot of expertise and solid craftsmanship go into every instrument we make and it's nice to get feedback like this every now and again.

Just a quick note. I returned safely from Penrith and, as perhaps you might have imagined, I have spent the majority of my waking hours playing the Maple Leonardo guitar.

I think I told you that the guitar was magical, having tried it in your office. My opinion has not altered since bringing the guitar home. If anything, it has strengthened.

I have been reflecting on why it is such a marvellous guitar and why it brings me such joy - it is very difficult to put it into words but I feel I need to be poetic here and fear that this goes well beyond any writing ability that I have.

It is certainly a most beautiful guitar. The craftmanship is awesome and the quilted maple makes it particularly striking. I could simply stare at it for hours on end, admiring the craftsmanship which it embodies so well.

In my work I became a great fan of arts and crafts architecture and philosophy more broadly, and studied a late 19th century professor of art history at Edinburgh who was taught by Ruskin and helped set up local arts and crafts groups in the city following a model which was used in Cumbria by Hardwick Rawnsley. I have been lucky enough to visit many fine buildings from this period and always admired the craftmanship involved in their creation, particularly their interiors. To see a guitar of such beauty created in your workshop reminds me so much of the creativity and the philosophy of that period.

The guitar’s playability is remarkable - I can play pieces which I had entirely given up on with my other guitars. Above all, it is the tone of this guitar which is absolutely stunning and is without any parallel in my experience.

I think I read somewhere that quilted maple can give a slight shimmer effect and I don’t know if this is what is going on here, but the depth of tone and resonance makes it sound simply beautiful. My wife (a very long-suffering guitar-widow and now an experienced Fylde video watcher) has certainly noticed and commented on the difference in sound and its richness and depth in comparison with my many other guitars. It makes me feel that, despite having owned some very nice and rather expensive guitars previously, nothing comes close to this one (none are even in the same ball-park or same neighbourhood to be honest!).

I’m now wondering if I have wasted years of my guitar playing as the difference is so great – I am asking myself why didn’t one of your guitars much earlier (and I’m already thinking about ordering a second one!).

I think it is Martin Simpson who says on one of his videos that the right guitar can make you want to play more and better and I recognise this sentiment absolutely.

I stress that I feel especially lucky to have been given the opportunity to own one of your guitars, let alone this beauty. Being able to take one home so quickly makes me feel doubly lucky. Thank you so much for allowing me to join your privileged ‘owners club’ and for making the coming lockdown an immense pleasure when it was setting up to be an immense challenge for me.

With my very best wishes
Dr Malcolm A Cooper